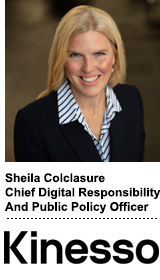 Kinesso, the data and technology unit IPG launched in October, announced the formation of a Digital Responsibility Practice on Monday.

The group will be led by Sheila Colclasure, a 20-year Acxiom vet who was most recently SVP of global public policy at LiveRamp.

In her new role, Colclasure will help Kinesso technologists, data scientists and programmatic buyers bake the notion of ethical data use directly into the work they do for IPG clients.

Beyond designing technology with ethical data use in mind, that will entail educating employees about the importance of proper data sourcing, permissions and usage in their day-to-day roles.

To date, Colclasure said, the industry hasn’t “done a great job building those considerations into the way the technology works.”

“It is applied data ethics by design,” she said. “We’ll go beyond the legal to ensure the work we do is appropriate, balanced and delivers value for people.”

Colclasure will also work across IPG’s clients to develop thought leadership and evangelize the value of digital responsibility to their businesses – and she’ll relay that message to stakeholders in Washington as the face of data ethics at IPG. A big part of her job will be building and nurturing relationships with the Federal Trade Commission and state AGs, as well as industry trade groups such as the ANA, the 4A’s, the IAB and the DAA.

“We have to regain our trust,” she said. “It may mean more transparency and more effective choices for people, or it may be adjusting practices so there’s restraint in marketing.”

Colclasure, who previously worked at the US Senate as a personal staffer for David Pryor (D-AR.), has been laser-focused on data ethics for two decades. She helped form Acxiom’s ethical data sourcing practice and data governance program, which will serve as the foundation for Kinesso’s digital responsibility initiative.

IPG bought Acxiom for $2.3 billion in July 2018 in large part because of its expertise in working with consumer data. As privacy regulations such as GDPR and CCPA continue to crop up across the globe, and Apple, Firefox and others make moves to limit user tracking, agencies have to insulate themselves against the risks of working with the data they’ve become so reliant on.

Although IPG has been under scrutiny following its Acxiom acquisition because the latter is also a huge data seller in the marketing space, Colclasure argues that Acxiom came with some of the most experienced talent and ethical practices in the market.

“I worry when the very careful, thoughtful, rigorous processes of Acxiom are under-appreciated by regulators,” she said.

But regulators – and data regulation – aren’t going away, and neither are the ever-louder societal demands for more privacy protections. That’s why IPG is positioning Kinesso with a focus on privacy under Colclasure, in order to instill data ethics as the holding company and its agencies enter an uncertain future.

“There’s a bit of a reckoning right now for the marketing and adverting industry,” she said. “We have a lot of work to do.”