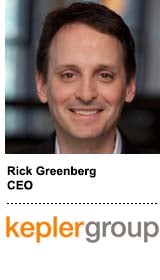 Here’s the crisis in the agency world, as Kepler Group CEO Rick Greenberg sees it: “Digital media is still run in an oversimplified fashion.”

Agencies often don’t take full advantage of their ad tech because the targeting for their campaigns isn’t granular enough, Greenberg said. “When you aggregate too many targeting variables, it’s really hard to tease out what’s working and what’s not,” he said.

So when Kepler Group spun out of MediaMath as an independent digital agency in 2012, it aimed to conduct programmatic transactions more granularly than its peers by creating efficiencies in the workflow.

How does Kepler ensure efficiencies? By automating more, which frees up employees to tackle complex problems instead of the tedious stuff like adding thousands of targeting tactics into multiple demand-side platforms (DSPs) and optimizing each as the campaign runs.

The agency uses a proprietary technology called Kepler Intelligence Platform (KIP), a database, decisioning and workflow management tool that automates the creation and optimization of programmatic targeting strategies. That efficiency pleases longtime clients like Robert Birge, who served as CMO of Kayak for six years and is now CMO of Lola Travel. Birge has worked with Kepler since 2012.

Birge also serves as an independent investor and adviser for a handful of digital startups. On each account, Kepler and KIP have been instrumental in driving performance across programmatic, search and social, he said.

“They’re as close as you can get to what the future media agency will look like, which is far more consultative, flexible and based on core [technology-based] capabilities,” he said. “Having someone that can move as fast as you can is a real advantage they bring.”

KIP helped Kayak save on infrastructure costs by streamlining its work across multiple platforms. And for Mia Tango, a maternity ecommerce site Birge advises, a light version of KIP allows the growing startup to leverage high-performing programmatic capabilities at an appropriate cost.

“It’s the manual work in [programmatic] that drives up costs,” Birge said. “The performance we get at Mia Tango is not even close to what we can get in-house, and we don’t have to spend $120 million to work with Kepler.”

Kepler’s teams are integrated around clients, and incoming employees are trained on a 35-module course covering everything from client communications to SQL coding to the nuances of ad tech platforms.

“Sometimes those bits of knowledge are siloed across the [holding company],” said Andrew Toledano, SVP at Kepler Group. “That’s why we’ve invested so much time in training all of our folks at the beginning, so they have that grounding in ad tech.”

Since launch, Kepler Group has grown from 6 to 125 employees and will open its first international office in western Europe next year. The agency has expanded fourfold its remit with existing clients into new business units, Greenberg said.

Kepler Group recently expanded into addressable TV and started buying programmatically on platforms like Pinterest and Snapchat. It will look toward opportunities on internet-of-things devices in the future.

“They’ve become far more platform- and media-inclusive and their ability to procure media through whatever channel into whatever medium has greatly improved,” Birge said. “They’re at a nice scale now where they have a depth of resources and a deep bench of talent.”

Kepler will continue to invest technology, but it won’t develop anything that already exists off the shelf.

“We developed our technology because we believe it helps accelerate the impact off-the-shelf ad tech can deliver,” Greenberg said. “Agencies need to be more technologically facile than ever before to deliver what clients need today, but that doesn’t mean that they should try to replace or outrun the ad tech community.”