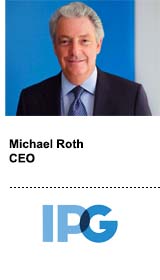 On IPG’s Q1 2017 earnings call Friday, CEO Michael Roth echoed past statements that he doesn’t see management consultancies as a threat, despite their encroachment onto agency turf.

“There is a great deal being written about the convergence that is bringing adjacent industries into each other’s orbit,” he said. “The increased competition that we all read about these days is not as evident to us as the headlines would have you believe.”

IPG’s total revenue for Q1 hit $1.75 billion, a 2.7% increase in organic growth compared to the year before. The holding company’s growth was slightly below target but IPG is still on track to meet targets of 3-4% growth for the year.

Roth said management consultancies can’t match IPG’s creative chops and open architecture model, which allow the holding company to create client teams with expertise across disciplines. But he acknowledged the threat consultancies pose in their longstanding relationships with clients in areas such as systems integration, CRM and digital expertise.

To manage that threat, he suggests collaboration rather than competition.

“Five to six years from now, the landscape will change,” Roth said. “Maybe you’ll see us partnering. We have direct expertise that they don’t have yet. Why buy it if you can rent it?”

Although Roth didn’t say what a potential partnership would look like, he alluded to competitive consulting capabilities that IPG is building within R/GA and other digital shops.

“By the way, we are going into the consultancy business,” he said. “It’s a logical extension of the fact that we have relationships with the clients, we know their business and we can bring to the table creative, new, innovative ideas.”

IPG’s position on consultancies is further complicated by the group’s relationship with Accenture, which signed Universal McCann on as its agency of record on Thursday.

“Accenture is a great client,” Roth said. “We will throw the best we have at IPG to achieving their goals, and we’re on the same page.”

IPG, which doesn’t offer the principal-based programmatic buying models that some of its competitors do, didn’t see as much of an effect on margins as clients move away from the model, where agencies buy inventory and resell it to clients for an undisclosed markup.

“Clients have seen the light,” Roth said. “There’s an inherent conflict if you’re doing programmatic that you have an interest in the inventory you’re selling. We always said that’s something we’d never do.”

Programmatic still yields high margins for IPG, Roth said, although he did not break out revenues for Cadreon, IPG’s programmatic unit.