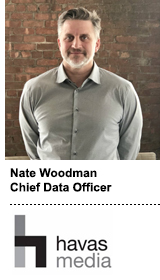 According to Nate Woodman, the new chief data officer for Havas Media, the media agency’s job is all about controlling data flows.

“How do you take information, move it and connect it to activation?” he said.

This isn’t Woodman’s first time working at Havas. About a decade ago, he was SVP of corporate development at Havas Digital before leaving to launch independent trading desk AdNetik. He returns to Havas from Iponweb, where he was general manager of demand and SVP of strategic development.

AdExchanger: Why back to Havas and the agency world?

NATE WOODMAN: It’s an extremely different organization from when I was last here. The leadership has changed. In the past, the work I did was very media- and digital-driven. Now, Havas is much more about bringing together media, creative and content to understand a complete picture.

Holding companies are trying to be more collaborative between creative, media and content. How has Havas been able to make that work?

The Havas Village model showed intent. It showed leadership support from the top down. And Havas’ smaller size helps. It’s easier to get together. We can sit in the same building. It’s not necessarily turning around a cruise ship. And the ownership by Vivendi brings that content piece front and center.

What synergies are being realized between Havas and Vivendi?

There’s an effort to bring the data that Vivendi has to bear into the delivery and execution of what we do in media.

The largest data asset that Vivendi has is Universal Music Group. They get information based on when and where their songs are played. With that information, we end up with an enriched data set that is not just about the identity of the user but has signals from content consumption.

In order to deliver on what the client has been asking for – holistic measurement and delivery of media – you have to take into account the type of programming. That’s part of the message, delivery and execution.

How far along is that process?

We have a pilot up, but part of my remit is to make that real and activate it in the US.

The most important job of the media agency is tying [data] to activation. How do you get the information from the client DMP, the holding company DMP and other sources and turn that into an activation layer? A lot of what I’m doing is about process and how to use data and technology to support that process.

How closely will you be working with Havas’ trading desk, Affiperf?

Affiperf used to carry its own global P&L. A year ago, a realignment put employees on local P&Ls. Part of the reason was to bring Affiperf into the planning and communications process.

Trading desks were seen and treated by the internal media teams as a vendor, which created a disconnect between what was intended for a client and the execution. Part of my role is creating a bridge.

You’ve been in programmatic for a long time. What’s the biggest change you’ve seen from marketers?

Most of the brands I engage with are digging deeper. They’re paying more attention, and a lot of good can come out of that.

When it was an afterthought, money was just spent and it created negativity on ad tech. Now, brands are asking the right questions. They don’t necessarily know how to get there, but that’s part of my role.

Interview has been condensed.