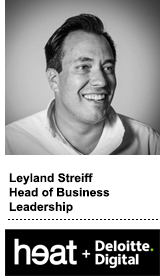 Deloitte Digital is a fast-growing consultant-owned agency making waves in the industry.

Deloitte’s agency subsidiary has more than 10,000 global employees from acquisitions such as creative shop Heat, creative agency Acne, Polish agency Digital One, design agency Flow and consultancy Daemon Quest, and grew 31% year-over-year in 2017. With $4 billion in 2017 revenue, Ad Age ranked Deloitte Digital as one of the world’s 10 largest agency companies.

Since its founding in 1999, Deloitte Digital has won clients like Vodafone for digital experience and transformation work. In July, its creative arm, Heat, won John Hancock/Manulife’s creative business from Hill Holliday after a three-decade-long relationship.

Deloitte Digital is disrupting agency business. But while other consultancies are trying to rewrite agency culture, Deloitte Digital maintains the foundation of creativity that ad agencies were built on, while broadening that impact beyond communications, said Leyland Streiff, head of business leadership at Heat.

“Our vision is centered on creativity,” he said. “But [agencies] have never widened the definition of what that means. It’s always been within paid media, no matter how large of a change in customer experience, business and go-to-market there is.”

AdExchanger: How is your positioning around advertising different than other consulting firms?

LEYLAND STREIFF: A lot of people say the consultancy is blowing up advertising. At the end of the day, the creative consultancy is a return to what Madison Avenue was founded on.

I came from Ogilvy & Mather, a place with a very strong founder’s culture. There’s no end to Ogilvyisms. Ogilvy had this idea of “We sell or else.” That evolved to mean, “We sell what we’ve got to sell, or else.” We spent years with clients saying, “Give us a brief and we’ll give you an answer.” And we always came back with media tactics.

As the impact of the brand has gotten closer to the business itself, we’ve doubled down on paid media and continued growing specialties. I think we’ve limited the power of what it is an ad agency brings to the business.

So, what should an ad agency bring to clients’ businesses?

It’s about doubling down on creativity to solve business problems. Sometimes that’s advertising. Sometimes it’s organizational changes or putting out new products. The driver behind all of that is creativity, but we’re widening the definition beyond just media or silos. It’s everything working together across the business.

What’s wrong with how agencies and holding companies are approaching advertising today?

As an industry, we’ve set ourselves up around paid media with P&Ls and incentives. There isn’t a lot of knowledge sharing across specialties.

At the holding companies, let’s say a client wants to reimagine their tech stack. They, for example, would pick four or five agencies based on their expertise, and each would drag that entire P&L with them. We’re able to staff nationally, pinpoint that exact specialist and bring them into an integrated work environment.

What’s a typical client engagement for you?

The client comes to us with a business problem. We pull in specialties that can break apart and answer what’s going on.

We worked with an insurance company last year, one of the largest internationally, with no presence in the US. An ad agency would do research, build a comms strategy and create a campaign. We brought talent from Heat for creative strategy and other people from across Deloitte, like technology consultants, insurance consultant and consultants that do business and product prototyping. In seven weeks, we output an entirely new digital business ready for beta launch.

How is that different than what a digital agency or other consulting firms are doing?

I see every agency trying to get to where a consultancy is now. They’re trying to break silos and grow teams. We’re coming from the opposite place. They’re going to have a much tougher time getting there.

Everything Deloitte has ever done is in business. When you integrate that with creativity, it includes paid communications. We’re able to scale creativity in a way an agency can’t.

We have access to anything within Deloitte, from tech to consulting. We assess the right specialists to solve a project from a category and sector perspective all the way through to technology partnerships and implementation, without bringing in the entire P&L.

Do your projects usually come through Deloitte Digital or the broader organization?

We have multiple accounts where we’re global agency of record. We get project work as well. Sometimes that comes in through Heat or sometimes other areas.

A lot of it comes from Deloitte Digital, because that’s where advertising, commerce and content end up hitting. But we’ve worked on projects as part of a team with patent attorneys. So, it really depends on the need. We will not hesitate to reach into the Deloitte matrix to bring those people in. There’s no demarcation.

Does Heat still have its own clients?

It’s a pretty even mix. Clients have come to us specifically with more advertising-driven asks where there’s no broader consulting relationship. Others come in with a Deloitte relationship and we become a part of that.

Is it tough to incorporate a creative culture into Deloitte?

Yes and no. It’s a new way of working for everybody. There are challenges that come with that. I think we’ve figured most of them out now that we sit in the same space with Deloitte Digital in New York. Physical location allows us to work better together.

Are you a holding company?

A holding company is made up of many P&Ls. We’re one P&L and a flat organization nationally.

Are you displacing agencies?

Yes, definitely. The AOR we’ll announce in the next month is a specific displacement. John Hancock was a 30-year relationship with Hill Holliday.

We’re displacing agencies because they have not reinvented over time. They’ve forgotten where they came from, why they were founded and what they sold. They’ve focused more on their own structure and need to deliver value to shareholders.