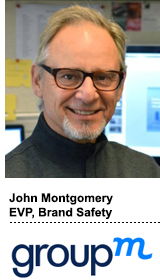 Display ads must be 100% in view for one second before a user scrolls past to count as viewable. Video ads still have to be 100% in view, but can be initiated as autoplay with the sound off. That differs from GroupM’s non-in-feed viewability standard, which requires a video to be user-initiated and played with the sound.

GroupM updated its standards after noticing the different behaviors users exhibit when scrolling through in-feed environments.

“People are consuming social video on autoplay with the sound off,” said John Montgomery, EVP of brand safety at GroupM. “Social video looks nothing like TV used to, so we have to understand this as a completely new medium.”

So far, clients including Unilever, Campbell Soup Co., Church & Dwight, Shell, Subway and Volvo support the new standard, as do content hubs like Hulu and Spotify and the video ad marketplace Teads.

“Social video could be a two- to three-second Snap," he said. "It could be vertical format. The numbers are going to be different because the way you consume it is different.”

GroupM will test its standards with clients for a few months and iterate based on the data. It’s been testing with some clients since December.

“We will test until we’re happy that we’ve got really good data, but it’ll probably take us three to four months to do that,” Montgomery said. “We want to study it more before we put a definitive line in the sand with duration.”

For instance, a user engages with a six-second YouTube pre-roll ad differently than a vertical video ad on Snap. If those discrepancies are significant, they could lead to the need for different viewability standards across platforms – and ultimately add more complexity to the viewability conversation.

“It would be great if we could have one standard that makes sense to most people, but we may well end up with having to adapt standards for other formats,” Montgomery said.

As for reporting discrepancies between measurement vendors, Montgomery said the space has matured.

“Early on in the process there were significant discrepancies, which was a problem for us and publishers. And we made do with it,” he said. “But it’s much more mature now. Particularly from our four preferred vendors, we’re seeing quite consistent data.”

GroupM isn’t yet offering remuneration to marketers based on the new standard. When the inventory that qualifies under the new standards scales, it will begin transacting against it for clients.

“It took us two years in the US to build up viewability to the point we could trade against it,” Montgomery said. “We’re in various stages of that around the world. The ability to measure isn’t the same in every country as it is in the US, UK or other developed countries."