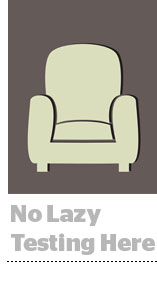 When La-Z-Boy decided to use Oracle’s data management platform, it didn’t want the technology to sit around.

Instead, it came up with a turbo-charged strategy to aggressively test, learn and adapt. The furniture maker’s agency, RPA, tested 168 audiences in 10 months using first-party, second-party and third-party data it loaded into the platform.

Its audience-focused strategy has already driven strong results. Since the start of testing last October, the company saw its campaigns perform better at a lower cost. Clicks increased 17%. Click-through rate rose 306%. The cost per click dipped 78%.

Testing so many segments required a close partnership with full-service, independent agency RPA, which planned when it would optimize and offer recommendations before the audience testing even began.

“We laid out a calendar year to plan for pivots we knew we would have to make. I call it ‘planned spontaneity,’” said Nichola Perrigo, VP, director of digital marketing at RPA.

The agency made sure data would be available immediately, not within months, so it would make quick optimizations. It set aside time to talk through recommendations with La-Z-Boy, so it wouldn’t be held up on approvals. And RPA emphasized an agile approach, where small groups could make quick decisions to test new audiences and pause or reallocate budgets as soon as they had statistically significant results.

The team doing the testing controlled display, video and social budgets, which it executed programmatically. Having the ability to optimize a campaign themselves, instead of relying on revised IOs from direct deals, enabled the agency to make adjustments quickly.

“Programmatic tends to be the best place to do the evergreen, always-on testing, because we can make quick pivots without IOs in place,” Perrigo said. Even within programmatic, the agency may test display first and video second because of video’s higher CPMs.

The agency also discovered that it was just as important to discover which audience segments flopped as it was to uncover new efficiencies.

“One of the biggest things we’ve learned is not being afraid to fail,” Perrigo said. “Finding out something doesn’t work isn’t a bad thing. It’s a learning. And every success and failure is getting you closer to the ultimate business goal.”

RPA has served as La-Z-Boy’s agency of record for more than a decade. The trust in the client-agency relationship made it easier to weather the uncertainties involved in constant testing, Perrigo said. “We’ve been on this ride together, where we’ve celebrated successes together and been perplexed together when something didn’t work.”

The agency’s prowess on the tech side contributed to its ability to do constant testing. “We believe at RPA that each of our clients should have the right stack, or advertising and marketing tools, and that this tech and tools are not one-size-fits-all,” Perrigo said.

RPA employs specialists for different tech platforms who know the tech well. Depending on what DMP the client uses, the company may have different recommendations for a DSP, dynamic creative optimization vendors and location-based vendors, so it strives to match the tech to a client’s other tech choice and needs.

Ten months in, RPA and La-Z-Boy are continuing to test. They’re building and activating audiences with more complexity, using techniques like clustering that allow them to bring together a few attributes into marketing personas that more strongly replicate potential customers. And the company hasn’t run out of ideas yet to test come 2018.