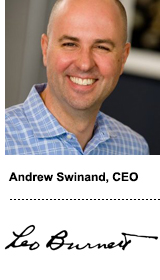 Leo Burnett, one of the most iconic advertising agencies in the game, is evolving the way it thinks about creative.

For Swinand, who spent time on the media side as president at Starcom Mediavest Group, data can develop the creative brief to reflect individual consumer intent and open the pathways for personalized creative.

“When the creative brief is for one 30-second spot, that’s what you get,” he said. “When it’s [based on] six segments and the nuances that create relevance, it’s a different starting point.”

But at Leo Burnett, the extent to which data is incorporated into creativity depends on changing clients’ mindsets and training employees to execute on this new mandate.

AdExchanger caught up with Swinand in Cannes.

AdExchanger: What’s the biggest challenge as the CEO of a creative agency today?

To be successful today, we need to have a base understanding of technology and data, but we still need to deliver our core promise of using creativity to change human behavior.

How is the creative brief changing?

It’s both integrated and collaborative with media. [We’re] starting with the sources of behavior and intelligence that allow us to connect with consumers.

We’ve added a metric of prosperity to all of our briefs. How does content add value to [consumers’] lives, grow [our clients’] business and increase sales? That has to be a collaboration between creative and media agencies.

I challenge that it’s subjective. The idea that creative is unmeasurable is a false construct.

There’s a thousand ways now to measure consumer response. I can measure how many people engage in creative. I can bring in Nielsen data and dynamic logic.

Publicis won the media business in the UK for P&G. They built a technology that incorporates Neustar data and Artis Optimizer (a Starcom product) to [measure] creative response rate [with] Nielsen data from stores.

The technology exists. We just need to change client and agency behavior to keep up with it.

Are your clients holding you back from realizing data-driven creative?

It’s a bell-shaped curve. We’re doing a lot of work with Allstate, who is really smart on this. Other clients are further behind. The closer you are to ecommerce, the higher the propensity and experience with digital.

How do you train your employees on programmatic and data?

We hold digital and programmatic days. We’re one of Google’s priority agencies; we have Google employees in the building. We’ve done similar things with Facebook and Adobe. The onus is on us to train them.

Who should own programmatic creative: creative or media agencies?

It’s a partnership. So much of the technology has been on the media side. But if you serve the same ads to six segments, it’s worthless. You’re using a more expensive way to buy run-of-site.

Vendors have the ability to say, “These people are drastically different from these people.” Then media agencies buy [segments of] women from New York City versus women from Chicago, which are different, and we serve the same ad to them. What’s the point?

Is personalized creative at the individual level possible yet?

The capability exists. It’s just not the factory that’s been built. How do we change behavior and approaches? It starts with the creative brief.

The starting point isn’t “How do I make a good ad?” It’s “What’s the right tool for the job?“

If you have a simple idea that communicates the client’s benefit, why do I need the extra 24 seconds? Embrace the six seconds and do it efficiently. If I have a complex business problem, maybe six seconds isn’t the right format.

It makes you approach the problem from a different perspective. The creative challenge becomes “How do I have something that’s so compelling that people turn the sound on?”

It’s like out of home (OOH). It’s just a different format for an old problem.