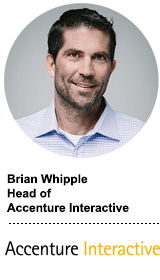 Accenture Interactive, a subsidiary of the management consultancy Accenture, is the world’s largest digital agency by revenue.

The digital network has 18,000 employees in 40 offices around the globe. It brought in $4.4 billion last year, roughly 13% of its parent company’s total revenue. With projected revenue at $6 billion for 2017, Accenture Interactive ranks above Havas as one of the biggest providers of advertising services globally, according to Bloomberg.

“There’s been a lot of press about consultants getting into the agency space, and we’re amused by that because none of us are consultants,” said Brian Whipple, head of Accenture Interactive. “That is a superficial read of what’s happening in the landscape.”

Half of Accenture Interactive’s senior leadership comes from the agency world, including Whipple, who spent time at both Omnicom and IPG. While the agency won’t be found in a creative pitch for a brand of soap or flexing its muscles in the upfront market, it’s cozied up to marketers at big brands by re-engineering the way they go to market and interact with consumers.

The agency, for example, helps automakers reimagine the way cars are researched and bought, or retailers redesign trying on clothes. It’s work that involves stitching together marketing and consumer technology to reach a digital-centric customer.

But by nature, that work often steps on media agencies’ toes. Accenture Interactive doesn’t buy media as a service, but it integrates digital and programmatic buying into most projects, Whipple said. It sometimes helps clients set up in-house trading desks.

“Often we have advertisements that need to be brought to the masses,” Whipple said. “We have to place that in media. Even if I wanted to avoid that, I couldn’t.”

But media buying as a service, which is becoming viewed as a commodity at holding company networks, isn’t a long-term goal for Accenture Interactive.

“We’re never going scale the media offering for itself,” Whipple said. “It’s a lower-margin business and it’s not particularly digital.”

Accenture Interactive has been able to scale so quickly – revenue jumped 51% globally last year from $2.9 billion – because it is “built on the shoulders” of Accenture corporate, a global firm with $33 billion in revenue, Whipple said.

The agency can quickly ramp up a team in Kuala Lumpur, for instance, on top of the finance, HR and real estate operations already there. Accenture’s IT backbone allows the agency to not just design customer experiences, but to run and operate them on its books.

“We have relationships with the government, taxation solved and the ability to create attractive employment packages,” Whipple said. “Our starting point is vastly accelerated.”

Accenture corporate is also a key funnel for new work; more than half of Accenture Interactive’s clients are shared with the consultancy, Whipple said.

“The account lead from Accenture is our best friend,” he said. “They bring one of our senior leaders to meet with the CMO about how they can grow into digital markets.”

“CEOs don’t want to manage relationships with 50 smaller agencies at $5 million apiece,” he said. “They want a relationship with one trusted adviser for $250 million.”

It’s a model holding companies are after, Whipple said. It’s just a question of how long it will take them to get there.

“They design cross-agency teams and have indirect alignment, but they’re still fundamentally different,” he said.