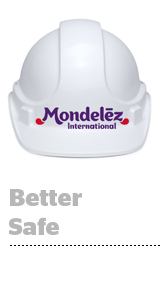 Sex, drugs, news, violence – any content that could lead to a negative association with one of its brands goes on the block list, said Jennifer Mennes, North America media director for Mondelēz International.

But the initiative wasn’t always efficient. Mondelēz was running post-bid measurement and paying for blocked impressions, rather than proactively weeding out problematic placements before making its buys.

“The media would go out and get blocked, which is good, but then we don’t get that investment back,” Mennes said. “That means wasted impressions.”

Using a standard DoubleVerify deployment to filter for brand safety, viewability and fraud, Mondelēz and its media agency, VaynerMedia, would block an average of 11% of impressions on a post-bid basis, or roughly 275,000 impressions per campaign, said Benjamin Allison, VP of global media at VaynerMedia.

And so Mondelēz and Vayner tweaked their approach and moved to pre-bid blocking with DoubleVerify earlier this year. The block rate immediately dropped to about 4%, or 13 million impressions, an estimated savings of around $250,000 in loss avoidance over the course of 2019 so far.

Mondelēz redeploys those savings back into the market, Mennes said.

“Rather than wasting it against impressions that were blocked and never seen by consumers,” she said, “we can use it to gain more reach.”

But there’s also a need for nuance in the quest for brand safety and suitability, what Mennes calls “an art and a science.”

Mondelēz, for example, makes sure that humans are part of the decision-making process when particular URLs or publisher sites get ensnared in its blocklist.

“We take a look at them to see why they’re being blocked and if they really should be blocked,” Mennes said. “We want to make sure sites aren’t getting flagged because we’re being overly aggressive on a specific standard.”

But Mondelēz isn’t shy about pulling spend, as it did temporarily from YouTube in late November 2017, when ads showed up against sexualized content featuring children and obscene comments appeared on kid-targeted videos. Mondelēz “worked closely” with YouTube to strengthen its policies and resumed spending “after we were comfortable with the changes,” Mennes said.

Mondelēz is careful not to perpetuate a double standard for brand safety and suitability on digital versus linear TV. Some advertisers have no problem running in a commercial pod during a violent action movie on television, for example, while comparable content on digital or streaming platforms gets automatically blocked.

“The standard is so high for digital that our system sometimes proactively blocks things that are pretty much the same thing you’d see on TV,” said Mennes, who noted that sites will get added to a Mondelēz brand’s white list on a case by case basis if, after examination, there’s no brand safety issue related to the target audience.

Mondelēz and VaynerMedia are now in the process of setting up a system so that everything that gets blocked also gets a human review. DoubleVerify passes a list of all flagged URLs to VaynerMedia for analysis on a weekly basis.

And that, Mennes said, is why brand safety will always be a work in progress, even for the most vigilant brands.

“This is not something you turn on and walk away from,” she said. “It’s constantly evolving for us.”