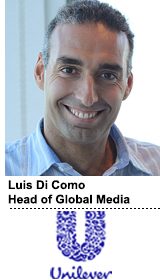 CPG giant Unilever has 400 brands in its portfolio.

Multiply that by a fragmented media landscape, an international consumer base and a crowded vendor ecosystem and it’s fair to say that Unilever’s global media manager, Luis Di Como, has a complex job.

Unilever, in Di Como’s view, has four main challenges when it comes to media investment: an overall lack of trust and transparency; the colliding worlds of media, marketing and ecommerce; the seemingly never-ending need for more content; and the imperative to use data for real-time optimization.

Charting those complicated waters, Unilever follows a framework set by advertiser consultancy Ebiquity that helps it define the role of media within its organization, to choose the right partners – and to hold them accountable.

“The media realities are completely different in China than in the United States or South Africa,” Di Como said. “Having an overarching approach that allows us to establish a couple of principles and to navigate this is super helpful.”

For Unilever, establishing a foundation of trust and transparency with partners is paramount. Confidence among large global advertisers has eroded over the past few years, not only due to the murkiness of the digital supply chain, but because of ongoing issues with agency partners.

It’s been hard for agencies to regain the trust they lost following the Association of National Advertisers’ 2016 report on agency kickbacks.

“We have an issue in the industry around lack of trust and lack of transparency,” Di Como said. “Viewability, verification, fraud, fake news and bad actors that hijack the advertising ecosystem – this is the foundational level of our challenges.”

Unilever works with Ebiquity to run regular media audits, as well as contractual and financial audits of its agency and ad tech partners to ensure they’re adhering to the agreed upon terms. In 2017, that work resulted in Unilever cutting its creative roster in half so that its brands were no longer working with 12 to 14 agencies each.

“We trust, but we verify,” Di Como said.

Unilever has been partnering closely with Ebiquity using this framework for 20 years, but the details and strategy are constantly changing.

As more clients embrace Ebiquity’s media model, it shows that brands are starting to truly grasp the media landscape and are ready to take back control of their spend, said Alan Rutherford, global chairman of media at Ebiquity.

“The amount of investment put into media as a percentage of a client’s overall business and revenue is significant,” he said, “and [it] requires rigor to make sure advertisers are getting the best value from what they’re spending.”

As a traditional brand marketer, Unilever has had to reposition its media strategy to play in a new ecosystem where media, commerce and marketing are colliding in new ways as major online retailers such as Walmart and Amazon transform into media companies in their own right. It’s also had to drastically shift its creative strategy to quickly pump out more high-quality content for digital environments.

“In this new world where the interruptive model is not the norm, we need an efficient approach to content,” Di Como said. “We’re moving away from an interruptive model to one that encompasses brand integration and branded content around consumer passion points.”

Last year Unilever, along with WPP, took a $15 million stake in Celtra, a mobile creative management platform that allows it to create content quickly and dynamically. And last week the CPG invested $12 million in influencer management platform CreatorIQ.

Unilever also has an in-house content group called U-Studio that produces creative for its brands on a quick turnaround, while its in-house digital investment platform, Ultra, run by its media agency Mindshare, helps track digital spend and make optimizations on the fly.

“Most of the investment we make in media is related to the content that we put out there,” Di Como said.

But in a quickly evolving marketplace where the pressure for growth is high, Unilever is constantly evolving its media and partner strategy. That’s why it helps to have a set of guiding principles.

“Media investment requires increased rigor today because of the complexity,” Rutherford said. “You can react so much quicker to the outcomes and outputs of the campaign and you can fine tune and optimize accordingly.”