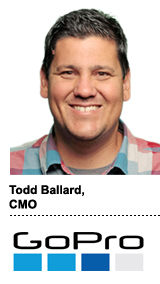 Todd Ballard, GoPro’s CMO, has his work cut out for him: Encourage people to buy action video cameras when nearly half the humans on Earth already have access to a sophisticated, high-quality camera embedded directly in their phone.

Once a darling of Wall Street, GoPro’s stock has mainly been on a downward spiral, with a few rallies here and there, since the company went public roughly six years ago. In November, following GoPro’s Q3 earnings, the stock was 95% below its record high in October 2014. The company reports full year 2019 earnings on Wednesday.

But Ballard takes his unique marketing challenge in stride.

“It sounds cliche, but we see it as an opportunity, not a challenge,” he said. “When people film their lives with their phones, they’re separating themselves from the experience – almost always, they’re watching what’s happening through the screen, not watching the thing itself.”

In the spirit of encouraging the latter, GoPro wrapped its second annual Million Dollar Challenge campaign in late January, whereby regular people share their best footage for the chance to win equal shares of $1 million and have their clips featured in a highlight video. The contest pulled in 42,000 submissions this year alone.

AdExchanger caught up with Ballard.

AdExchanger: How do you drive up demand when cheap GoPro knockoffs are ubiquitous and phone cameras just keep getting better and better?

TODD BALLARD: Innovation is an obvious answer. The technology in our cameras is unmatched and continues to separate us from what anyone else in the category is attempting. But the more significant factor is the power of our brand. We’ve spent 16 years establishing GoPro as authentic, known equally for quality and for cool factor.

Being first to market definitely helped us establish the brand quickly, but it’s taken extraordinary effort to maintain and grow. Ultimately, it’s what allowed us to be somewhat unfazed by growing competition.

How would you describe GoPro’s marketing strategy?

It’s changed quite a bit over time. In the early days, we were very focused on brand marketing. Most of our advertising was at the top of the funnel around awareness. But as we begin to fight for more share of mind and wallet – not just in our category, but in the world of consumer goods in general – we’ve seen how important it is to educate our consumers about the features of our products. The data told us that when we were too brand centric, people were getting lost in the customer journey.

What data did you look at?

A lot of it came from our consumer insights and data analytics team. We looked at how many first-time consumers we had versus consumers upgrading to new versions of cameras. We also did research and talked to consumers. We realized we’d been assuming that people who had already bought a previous model knew about all the newer features, but then, for example, we saw customers buying waterproof cases for waterproof cameras, and it was clear that they didn’t. It was a big aha moment for us.

Are you starting to merge brand and performance?

Both play a role, and the metrics change as you move through the funnel. It’s easier to measure the performance side of marketing, but if you get too stuck in performance you can become too focused on the transaction.

There was a time in the past when GoPro started doing more performance, but the top of the funnel began to narrow, because we weren’t investing enough in branding and awareness – the aspirational part. It doesn’t matter if the bottom of the funnel opens if the well of consumers is drying up at the top.

What data is important to you?

We segment our customers based on things like where they’re coming from, the types of content they ingest, do they travel. Our most important segment is what we call “active captures,” people who are out there and interested in capturing content and sharing it. CRM is also an important one for us. The more people we can drive to our site, the more we have an opportunity to learn about them and get them to convert.

Beyond the sizzle reel you create, what do you do with all of that free user-generated content you get from the Million Dollar Challenge?

We had 25,000 submissions to the challenge last year, and this year alone we got 42,000 from 104 countries. We now have this huge library of amazing content from around the world that we can leverage across our own advertising: earned, owned and paid. Some of it is fun and quick, and in other cases we dig deeper into the stories, reach out to the people who captured them. This pretty much stocks us up with footage and content for 2020, and we don’t take it for granted.

The KPIs for this campaign were awareness and engagement, but what about sales and were you able to attribute any to last year’s Million Dollar Challenge?

Sales is our biggest metric, and we try our best to attribute a percentage of transactions to the challenge, but, ultimately, it’s a gray number.

A lot of this stuff is subjective. We’re trying hard to understand which metrics are important to drive the growth of the business and aren’t just internal celebrations.