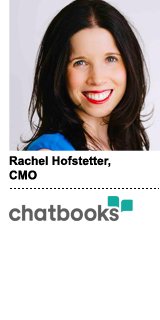 As a challenger to Shutterfly, the digital photo book startup Chatbooks has sought to carve a niche with millennials and moms since its 2014 launch.

The brand’s initial marketing strategy has been mostly organic and word-of-mouth, but last fall it stepped on the paid media gas pedal and bought its first linear TV ad.

Since then, Chatbooks has invested in several long-form videos aimed at its core audience of connected moms. The move paid off, in one case generating 65 million views for a single video.

Although the brand works with a few external agencies, the company prioritizes ad buying and attribution as in-house competencies.

Hofstetter spoke with AdExchanger about how Chatbooks pulls it off.

AdExchanger: What made you invest in TV?

But, at the same time, we know we could get sophisticated with our attribution reporting, especially in channels that other brands like ours aren’t considering, like traditional TV. We have tried other traditional media, like billboards in Times Square, but have put a fairly significant amount of dollars behind TV.

How about long-form video?

The way we look at it is, we put 10% of our budget toward experimental channels. And that’s a great way to make sure we are trying new things, but not going overboard with any one channel. If an experimental channel does well and meets or exceeds our cap in our core budget, then we move it over to core and it becomes part of our regular recurring monthly cycle.

The main reason we decided to go into long-form video was to replicate this experience of your cool neighbor down the street using Chatbooks, and she’s pulling out her app and showing you how easy it is to create a photo book. Long-form not only shows you the “why you need it,” but the “how you use it.” It’s been remarkably successful for us.

How about short-form video, which seems to do better in a feed environment?

We’ve found success with both. Everyone thinks long-form is dead, but I think long-form works well when it’s funny. Funny is what keeps you watching.

That said, we’ve done a series of short videos that feel like what your friend would post on Instagram or Facebook. Our creative director filmed a video of his kids looking at Chatbooks and overlaid it with a little music. It’s only 15 seconds and works really well as an ad for us.

What makes it work?

Our latest video featured a different aspect ratio than all of our other videos. It’s not 100% vertical yet, but it’s much more of a square unit now than the previously horizontal. So you can watch it vertically with your phone and don’t have to flip it.

All of our videos from here out will be filmed in that aspect ratio. It’s about making the video look and feel organic, like it actually exists in the Facebook and Instagram world.

What’s your biggest challenge as a multiplatform brand marketer?

Sometimes a campaign works on Facebook, but doesn’t work on Instagram. Or maybe you find a niche audience on YouTube you won’t get anywhere else. We have at least 10 channels running in our media mix at any given time.

We’re always watching what happens using more sophisticated attribution models when we’re doing something like TV, of course, and on Facebook. But we’re also looking for that organic lift element.

Where are you at with TV and digital attribution?

We’re really watching our organic-to-paid ratio, and it’s something we talk about every week, if not every day. As we change our spend levels, we know, for instance, that some content brings in more customers organically than others. We can see that videos bring in more corresponding organic customers to each paid customer than a static ad. Up and down the funnel, we definitely have a lot more to learn.

What are the kinds of KPIs you’re measuring?

Is our brand awareness growing from a super, top-of-funnel, unaided awareness perspective? But we also look down the funnel, because at the end of the day for us, we want to know, “Did somebody buy?”

We do this through a host of means, including surveys or demographic information we get from Facebook around who’s responding most to ads. One of the most interesting things we do is really active listening.

Our customer support team consists of 50 stay-at-home moms across the country, who use a number of Slack channels for one-on-one conversations. We’re at a point where we’re trying to put that [raw] data into [a structured format] so we can look at it on a level beyond anecdotally.

What needs to improve in attribution?

I’d love better attribution for podcasts. Unlike, say, TV, where I can run a TV ad and know exactly when it aired, with a podcast somebody might download it six months later and just then hear the ad. I’d love to be running ads on 30 different podcasts at once, and the only reason we’re not is attribution is not there. It’s way harder than TV because you don’t know when people are listening at all.