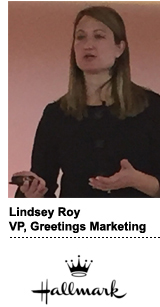 The 102-year-old card company moved all of its media buying to programmatic in 2015, and it’s “one of the best things we’ve done,” said Lindsey Roy, Hallmark’s VP of greeting marketing, speaking at the Mobile Marketing Association Leadership Forum in New York City on Wednesday.

Hallmark also wants to buy based on addressable audience rather than targeting websites or broad-based demographic segments, like women 25-54.

“We buy where she engages,” Roy said. “Two or three years ago, you’d have executives saying, ‘I think we should be on this site or this segment or this show’ – but we’re following our users, and that gets us the most value.”

Hallmark, which partners with Starcom on media buying, is sitting on what Roy called a “treasure trove” of first-party data, which the brand has been collecting in earnest since launching its in-store loyalty program in 1994. Hallmark also invests heavily in data acquisition, Roy said.

For the longest time, that first-party data cache remained mostly untouched from an advertising and marketing perspective.

But in 2015, during its Valentine’s Day push, Hallmark put 5% of its spend against first-party data. By Mother Day’s, that was up to 30%. This year, 50% of Hallmark’s digital spend is first-party targeted. Although Hallmark historically has spent around 95% of its marketing budget on seasonal campaigns with short flights, birthdays happen every day of the year, and that presents a scale challenge, Roy said.

But first-party point-of-sale data is changing the economics of targeting individuals at scale. If a mother buys a birthday card for her son or an anniversary card for her husband at a Hallmark store, for example, Hallmark can begin building a time-based element into its targeting strategy.

“This is a new frontier for us,” Roy said. “It means not only understanding the ‘who’ and the ‘why,’ but also starting to get at the ‘when.’”

This year and next, Hallmark is focusing on doing more to personalize ad content. It has the learnings and audience insights, but no easy way to put them into practice.

“Our media acumen is ahead of our creative,” Roy said. “We segment content based on lifestyle and occasions, but we want to get to user-first, bottom-up content. We don’t have a great way to vary our content in an automated fashion, but we have some exciting tests underway.”

And in terms of automated media buying, Hallmark isn’t looking back.

“Programmatic works,” Roy said. “If you haven’t taken the leap on the brand side, please do. We feel it’s much more transparent than what we were doing before.”