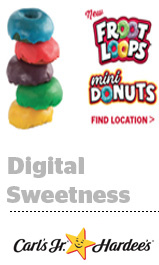 When CKE Restaurant Group, the owner of Carl’s Jr. and Hardee’s, launched a Kellogg’s Froot Loops-inspired mini doughnut last Thursday, it needed to make sure customers walked through its doors to buy.

So CKE went all-in on digital with a campaign that spanned YouTube, Instagram, Snapchat, Spotify and Twitter and included a custom partnership with digital pub Thrillist.

It’s the first campaign CKE has launched without any traditional media, said Jeff Jenkins, chief marketing officer at the company.

“We have an audience target from Gen Z to millennials that are really driven by their phones,” he said. “We’ve got to be where our customers are, and those customers are digital-first and phone-first.”

While CKE’s audience spans all ages and demos, the group used social data to home in on two specific audience segments to target the doughnut launch. It found that young parents and ’90s babies would get excited by the nostalgia factor of the iconic Froot Loops cereal, while teens would be inspired to post the colorful doughnut on social media, Jenkins said.

“We took those two audiences and really went deep on targeting around the product,” he said. “For certain products, there are times we can go really deep and be much more effective. It’s something we’re doing more of to get every dollar we can out of our spend.”

While it’s too early for results, CKE is already seeing success in earned media, with a 55% year-on-year increase in brand mentions on social since the campaign went live. The group, which started selling the doughnuts in select markets early, began generating buzz on social media before the campaign launched.

“We started to feel some heat around the product organically, so we had to accelerate our campaign around the chatter,” Jenkins said.

Within three hours of the doughnut’s launch in Los Angeles, three reviews popped up on YouTube, with one video generating 40,000 views within three hours, Jenkins said. Two hundred consumer outlets covered the doughnut, including BuzzFeed, Food + Wine and People, and it appeared on NBC’s “Today” Thursday morning.

One interesting finding for CKE was that an all-digital launch resonated in rural areas, where digital penetration is starting to match big cities. In Hyden, Ky., which has a population of 365, CKE sold enough doughnuts within the first three days of the launch to cover 80% of the population, Jenkins said.

“In small towns and rural areas, it’s a very different plan than we would’ve launched even three years ago,” he said. “It’s an inflection point not just in big cities, but across the US.”

The all-digital launch also helped CKE reach a younger audience with a breakfast snack, a meal that tends to draw in an older audience on their way to work.

“It’s interesting to see us use a digital tool to create buzz for a product that traditionally doesn’t skew as young as what we’re seeing,” he said.

CKE collaborated closely with Kellogg’s on the campaign as well as its agencies, Havas for advertising and Initiative for media. The group will consider using a full-digital campaign again for future launches where it aligns with a product, Jenkins said.

“Everyone is searching for the right way to grab the customer’s attention and maximize it,” he said. “The traditional methodologies aren’t as effective as they once were. Consumers are savvy. You can bore them very quickly with traditional advertising.”