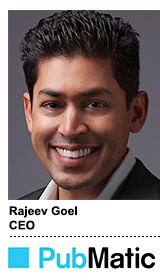 PubMatic raised $118 million in its public offering on Wednesday, significantly more than the $75 million it hoped to rake in in its November S1 filing. After a long period of investor disdain, are the good vibes back for ad tech?

In this episode, PubMatic CEO Rajeev Goel talks about his “sweatpants IPO” experience and the surge of digital media consumption during the pandemic shutdown, which has in turn boosted digital advertising.

“The world is very different now than it was in January,” Goel says. “We think the opportunity is much bigger for us and our customers, because so much is changing with consumer behavior.”

PubMatic’s S1 filing shows revenue growth of 15% or 16% in each of the last three years. Revenue was $99 million in 2018, and $114 million in 2019, and is on track for a similar increase this year. And the company has been consistently profitable for more than five years.

PubMatic will use its new funds to invest in several areas. Those include omnichannel support for publishers, including in mobile, video and CTV. In CTV, Goel sees an opportunity to build header bidding-like functionality that will boost publisher yield. On the buy side, it will jump on the supply-path optimization train to help agencies and brands consolidate their ad spend onto fewer platforms.

PubMatic currently has only 2-3% share of the total addressable SSP market by its own estimate, so Goel says the sky is the limit.

“We want to grow that market share aggressively over the next couple years,” he says. “The way we’re going to do that is by taking market share from some of the large platforms that are losing share to header bidding, and also from many of the point solutions that we think are not as effectively able to invest in the innovation and omnichannel needs that publishers have.”