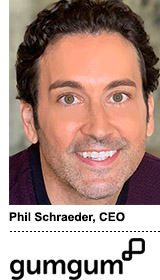 GumGum is one of the handful of companies that have muddled along for years in the unsexy backwaters of contextual advertising, alongside competitors such as Peer39, Oracle-owned Grapeshot and Zefr.

Over the last eight to 10 years, “The cookie was in full steam, integrated everywhere and everyone was really focused on how they could maximize audience data,” its CEO Phil Schraeder recalls.

But while the industry was running toward user-level data, GumGum doubled down on page-level awareness. Its technology combines computer vision and AI to match contextual ads against digital and video content in a way that’s not reliant on cookies or mobile identifiers.

Like so many ad tech companies, GumGum is wrapping up a year of violently changing fortunes. The COVID pandemic shutdown forced it to lay off more than 20% of staff in the spring, but the company has since rebounded. Revenue this quarter is expected to rise 25% compared with Q4 2019 and the company is more profitable than it was previously, according to Schraeder.

“It’s nice to be part of … a company that’s doing great ads without using privacy data,” he says.