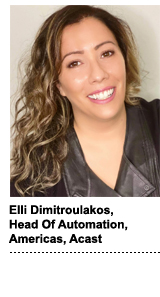 The podcast market is growing like crazy, with ad spend set to break $2 billion by 2023, double the number eMarketer has forecasted for this year.

But there are still a few roadblocks standing in the way. Measurement is a big one.

“It’s the elephant in the room,” says Elli Dimitroulakos, head of automation in the Americas at Acast, a podcast monetization and distribution platform founded in Sweden in 2014 that now hosts more than 30,000 podcasts.

“We’re all trying to solve measurement because it’s really the basis of media buying, especially through the lens of digital and programmatic,” Dimitroulakos says on this week’s episode of AdExchanger Talks. “We want accountability – where do we spend our dollars and what does that mean in return?”

Problem is, there’s “massive fragmentation” across supply platforms, “and there isn’t an omnichannel view for the agency and advertiser,” Dimitroulakos says.

Podcasting isn’t alone. The same lack of accountability – and fragmentation – is holding back ad dollars on other channels, including connected TV.

Solving for measurement, whether on the podcast front or for CTV, is going to take time. It won’t be easy, but it’s doable, she says. The time is now for new approaches and purpose-built technology.

“A lot of the technologies that exist today are fragmented because they were created … for traditional media,” Dimitroulakos says. “We’re trying to make them do something they weren’t built to do.”

Also in this episode: The rise of dynamic ad insertion tech, the role of an open ecosystem in helping publishers monetize and distribute their content – and why, although it feels like everyone’s got their own podcast these days, we have not yet reached “peak podcast.”