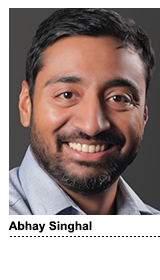 On the heels of an Axios report that InMobi is in talks to acquire Xandr from AT&T, InMobi rolled out a new offering for mobile telcos. Coincidence?

This week on the AdExchanger Talks podcast, InMobi Marketing Cloud CEO Abhay Singhal discusses the opportunity to expand its ad business by partnering with mobile carriers around the world. (He declines to comment on Xandr.)

That media space can include browser-based impressions and apps, but Singhal says that’s not sufficient. InMobi Telco includes a branded property called Swish, which sits on the device and offers news, weather, games and commerce apps.

This isn’t the first time InMobi has tried to expand by working with huge companies that enable the mobile ecosystem. Its Glance subsidiary offers a lock screen content experience that device manufacturers can offer natively on mobile phones. Glance recently raised $145 million from Google and Peter Thiel’s Mithril Capital.

Also in this episode: As one of the largest and longest-operating mobile ad tech players in the world, InMobi employs 1,500 people globally, about 1,000 of whom are based in India. Singhal discusses running a global business during COVID times, when the US is mostly vaccinated but India vaccination rates are still in the single digits.