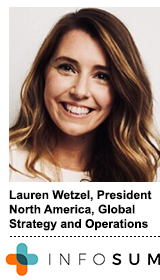 InfoSum is a company to watch. The five-year-old data services business enables onboarding, the development of new identity solutions and other use cases with a focus on privacy and data security. In this episode, President Lauren Wetzel talks about the company’s product differentiation (“non-movement of data”) and where it fits in among big players like LiveRamp and Snowflake.

“Current solutions are built on a prerequisite that your data must be centralized,” Wetzel says. “Effectively by centralizing data you’re sharing vast amounts of personal data. The moment that this happens, not only is the privacy and security of that personal data at risk, but the data owner actually loses control of that data.”

For a brand customer that wants to onboard its data directly with a media owner, InfoSum will set up a database (which it calls a “bunker”) that mirrors that brand’s own data environment, she says. Anybody else who also has a bunker can match against that data set for planning, for activation or for measurement.

When it comes to identity, the company is agnostic. It doesn’t offer an identity solution or graph of its own, but hopes to underpin other emergent identity systems for digital advertising. She says the goal is to enable matching not just a single type of ID, such as a mobile ID or email address, but multiple IDs reflecting diverse customer attributes.

Also in this episode: Industry skepticism about “privacy first,” TV use cases, the Brian Lesser connection.