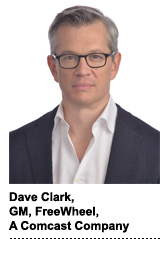 Advertisers are ready to buy TV like they buy digital, says Dave Clark, general manager of Comcast-owned FreeWheel, on this week’s episode of AdExchanger Talks.

As digital-like capabilities rapidly come online in the TV space – like buying across fragmented audiences, managing frequency, better targeting and understanding lower-funnel metrics – the demand is proving quick to follow, he says.

FreeWheel’s role is to facilitate that process.

Historically, it’s served that purpose via a focus on the sell side. But, more recently, FreeWheel solidified its demand-side presence through its acquisition of Beeswax in late 2020.

One thing FreeWheel isn’t doing, though, is building a walled garden of its own. Beeswax does not have unique access to NBCU or Peacock inventory, despite their common parent company.

The vision, rather, was to integrate Beeswax directly into FreeWheel’s monetization rights management system (MRM), so that customers can acquire third-party inventory from within their instance of the MRM and bundle it as reach extension.

FreeWheel did the integration work after the Beeswax deal closed earlier this year and it’s in the midst of rolling out the bidder within its MRM.

“That’s a big deal to programmers like NBC or ViacomCBS or Discovery who, right now, have more demand than they have supply,” Clark says. “We also think there’s a place for a more video-focused DSP in the marketplace to sit alongside the larger players.”

Also in this episode: Nielsen’s ongoing MRC headache, the programmatic upfront and what climate change has to do with the ad tech industry.