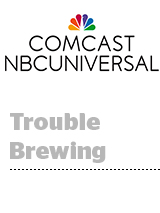 There’s mounting pressure on the Department of Justice to investigate alleged antitrust violations by Comcast-NBCU. The American Cable Association (ACA) published a letter to Makan Delrahim, the DOJ antitrust chief, that said Comcast poses “a much greater threat to competition” than the combined AT&T-Time Warner merger. President Trump amplified the ACA’s Comcast appeal on Twitter, The Washington Post reports. The president was also a vocal observer during the AT&T merger review, calling for increased scrutiny of the company due to personal contentions with CNN. On the flip side, at a White House Diwali event on Tuesday, President Trump chided FCC Chairman Ajit Pai for hampering Tribune’s sale of its local TV stations to the conservative broadcast network Sinclair. More.

Netflix says it will test a cheaper subscription option in some lower-income global markets as it tries to balance subscriber growth with sustainable prices. “A lower-priced offering would be a departure for Netflix, which has maintained or raised prices in major markets as it adds content and invests in local productions to draw subscribers,” according to Bloomberg. Netflix won’t say where and when it will begin testing the lower-cost subscriptions. More. Netflix doesn’t need YouTube’s ubiquity, but rethinking its pricing tiers and monetization is an important step toward potentially offering a free, ad-supported version – which, if and when it happens, would likely be in markets where Netflix doesn’t have strong in-language content and can’t easily gain traction with subscriptions.

Most industry leaders concede that the tech industry needs to be regulated, but many are also warning against over-regulation in response to recent privacy scandals and Europe passing GDPR laws. “We’ve got to regulate thoughtfully, but we want make sure we’re remaining the innovation leader,” said Democratic representative Ro Khanna of California at The Wall Street Journal’s Tech D.Live conference in Laguna Beach on Monday. Khanna wants, for instance, to enforce regulations for how long a company can wait to disclose a data breach. But former Microsoft CEO Steve Ballmer argued that such rules have to be carefully created so as to not alert more hackers to a company’s weaknesses. It’s just a glimpse inside the catch-22 of tech regulation. More at The WSJ.