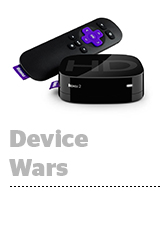 Roku has built a lead in the OTT streaming device market, despite strong competition from Amazon, Google and Apple. But that may not be true forever. Morgan Stanley analysts said Amazon’s Fire TV market share has grown in the past year, while Roku has held steady. Device sales have been a less important revenue driver for Roku since it IPOed a year ago and subsequently grew its advertising platform, which now accounts for the majority of revenue. But Amazon can still threaten Roku’s overall business. Business Insider wrote: “The danger for Roku is that its rivals, particularly Amazon, might slow the growth of its advertising business, whether by stealing market share from its devices and software or by diverting the attention of Roku users to alternate video services.” More.

Snap head of content Nick Bell is the latest in a string of high-profile executives to leave the company, Variety reports. Bell, who had been with Snap for five years, led the team that launched Discover and helped build the platform’s media partnerships with brands like NBCUniversal, as well as its original content. He will be replaced by former Huffington Post CEO Jared Grusd, who joined Snap in October to succeed departing strategy chief Imran Khan. Bell’s exit isn’t a good look for Snap, which is not only losing its executive team – CFO Drew Vallero, sales VP Jeff Lucas and product VP Tim Conrad have all left in the past year – but also its user base. In its Q3 earnings, Snap reported daily active users were down 1% from last year and will continue to fall in Q4. More.

SAP has agreed to acquire the marketing survey and analytics business Qualtrics for $8 billion. It’s a surprise move as Qualtrics was about to IPO with an expected value between $5 billion and $8 billion. As with other recent multibillion dollar software acquisitions – like IBM’s $33 billion deal for Red Hat, Microsoft dropping $7.5 billion for GitHub or Salesforce snapping up MuleSoft for $6.5 billion – this SAP deal marks the new “Consumer Era” as major enterprise companies transition from traditional enterprise resource planning (ERP) and CRM systems to a new kind of direct customer data management. “ERP showed what was happening in the main office and CRM what was happening in offices all over the world; experience management promises the ability to understand what is happening with customers directly,” wrote Ben Thompson of Stratechery. More.