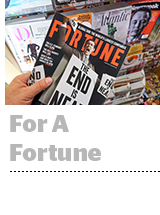 Meredith sold the business news publication Fortune to Thai billionaire Chatchaval Jiaravanon for $150 million. Jiaravanon is the son of Sumet Jiaravanon, executive chairman of Thailand’s largest conglomerate, Charoen Pokphand Group, which spans food, retail, auto, finance, pharma and telco companies. Jiaravanon plans to invest in Fortune’s “digital capabilities, geographic expansion and editorial talent as part of a strategy to become the premium business content provider worldwide,” he said in a statement. The sale is part of a broader effort by Meredith, which acquired Time Inc. for $1.85 billion last November, to sell off some of the brand’s storied but struggling titles. He is the second billionaire mogul to buy one of Time’s brands, after Salesforce CEO Marc Benioff and his wife Lynne bought Time Magazine for $190 million in September. Read more at Fortune.

The push for a new national privacy law is creating strange bedfellows. Advertising companies, big tech, privacy advocates and publishers are all pushing for unified regulation – for varying reasons. Advertisers and tech companies don’t want to deal with the headache of complying with potentially dozens of different state and regional regs, whereas privacy campaigners are hoping to take big tech (mainly Google and Facebook) down a peg with a US version of Europe’s General Data Protection Regulation. On Friday, ad trade orgs—including the ANA, 4A’s and IAB—sent a letter to the National Telecommunications and Information Administration, calling for the government to “address the emerging fragmentation in state privacy laws” but with “reasonable data practices” (a.k.a., something a bit more chill than GDPR). Axios has more.

Suffer For Your Crimes

In the wake of revelations that the FBI is investigating non-transparent media rebates, the ANA published a white paper detailing potential crimes agency executives could be charged with for accepting undisclosed payments from vendors, The Wall Street Journal reports. “If two or more employees agreed to hide, divert or conceal earned rebates and cause a false report to be sent to an advertiser, a conspiracy may have taken place,” the white paper reads – with the important caveat that no one has yet been accused of any crimes. The FBI is hoping to talk with marketers who have already identified instances of fraud with their media agencies. More. Also in the WSJ: As clients grapple with data privacy regulations, many are pushing liabilities for potential fines onto their media agencies. Read that.

The Nature Of Things

Syndromic surveillance, the collection of data to monitor disease outbreak, historically relies on patients actively reporting symptoms. “In recent years, syndromic surveillance has also begun to include passively collected information, such as information from social media, which can also lend insight into potential disease outbreaks,” according to a new report published in the science journal Nature by researchers at Google, Harvard and public health departments. By connecting Google search queries and location data, for instance, researchers could identify restaurants a disproportionate number of people visited prior to picking up a foodborne illness. More. The report shows the latent societal good that can be drawn from data sets currently used almost entirely by advertisers and also why ad-fueled companies like Google, Facebook and Amazon are investing so much in life sciences and pharma advertising solutions.

Amazon signed a deal with Apple to grow direct sales and product selection on the ecommerce platform, CNET reports. Currently, most Apple products on Amazon are sold by third-party resellers and may not meet pricing or customer standards that Apple would enforce with a direct seller. That will come to an end in January when Amazon starts pulling all unauthorized Apple products. The only Apple product line not included in the deal is the Apple HomePod, which competes directly with the Amazon Echo smart speaker. (Google Home speakers aren’t available, either.) More. And CNN has more on what the deal means for third-party sellers.