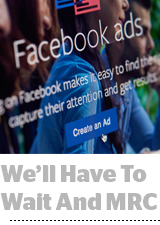 Facebook could lose its MRC accreditation. The MRC warned Facebook that it might lose its seal after failing to address concerns about inflated video ad metrics that arose in 2016 and led to an audit in 2019, The Wall Street Journal reports. MRC CEO George Ivie said the audit is at an interim stage, and Facebook said such exchanges are “part of the audit process.” But the audit has encountered some road bumps, since Facebook hasn’t separated its display and video ad measurement or shared information about how it monitors fake accounts. If Facebook doesn’t address the issues, it could lose its MRC badges for video and display ad measurement. “This feedback should be considered a strong message to Facebook,” according to the MRC.

The UK ad market grew for 10ten consecutive years, peaking at $31.6 billion in 2019. But the latest joint report by the Advertising Association and WARC forecasts a drop to $26.3 billion. The internet will fare better than other media. Search and online display are forecasted to drop by 12%-13%, compared to 20% for TV, 21% for radio and 34% for cinema advertising. And buckle up, because the second quarter will be the toughest, with overall media investments set to decline by 39%. “Cutting advertising in a recession directly correlates with a slower recovery, but the practicalities of marketing in the current climate mean sustained investment is simply no longer feasible for a number of large product sectors.”

Amazon Web Services VP Tim Bray quit “in dismay” on Monday over workplace safety practices. In a blog post, Bray said he’s leaving more than $1 million on the table in salary and unvested shares. Having a top engineer quit, and so publicly, is a big deal when Amazon is trying to prevent employees from organizing or unionizing. Then there’s House Rep. Pramila Jayapal, who represents Amazon’s home district in Seattle and is becoming a public opponent after trying to quietly shepherd employment and antitrust issues to Amazon top brass, The New York Times reports.