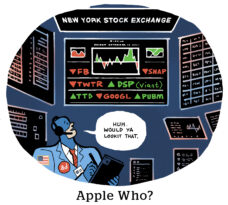 For years, the public market was quicksand for ad tech. Investors were unimpressed by early public companies like Rocket Fuel, Sizmek and Millennial Media, to name just a few. Wall Street also didn’t want to bet against advertising-dependent companies in competition with Google and Facebook. (The Trade Desk was a notable exception.)

But Apple’s ATT framework – which requires every iOS app (14.5 and above) to ask for permission before tracking – is a learning opportunity for investors. Guess what? Facebook, Google and Snap are ad tech businesses, too, and they’ve been banking on their until-now superior ability to track and target actual individuals over time. The big walled garden ad platforms were hit hard by ATT because user-level targeting and tracking across sites and apps is now much harder to do for iPhone owners.

And while the big guys struggle, there are mobile and programmatic ad tech businesses that are actually more resilient to the change. Not every investor appreciates that fact, though. Unity, the mobile gaming and ad tech company that IPO’d a year ago, experienced this during its meetings with investors, CEO John Riccitiello told Stratechery. “We explained that difference, and some people got it immediately and were onboard with it and said this makes complete sense, and other people were unwilling.”

Apple’s WebKit team, which operates the open-source browser code behind Safari, added private click measurement (PCM) for the iOS 15.2 developers beta. PCM allows publishers and developers to attribute campaigns based on data that shows whether “someone who clicked ad X on website A later converted with value Y on website B,” per the WebKit blog post.

That’s a jargon-y way of saying that an ad impression on one site or app can be deterministically linked to a conversion on another site without exposing user-level information – and thus it may potentially become a standard feature for iOS and Safari advertising.

This technology is currently available only for iOS beta developers who use SFSafariViewController, the open-source tool for developers to create in-app browsers. In other words, this is a tiny, theoretical product – for now. (But so was SKAdNetwork back in 2018.)

Small developers are among those most keenly affected by ATT. The app-install engines they relied on (namely, Facebook, Snapchat and Twitter) must overhaul their attribution. And so many are focusing their attention on organic marketing – getting their brand in front of likely customers without paid media boosts – according to a conversation between Eric Cowley, executive director of the investment firm GP Bullhound, and David Barnard of the app services company RevenueCat.

One way to mitigate higher customer acquisition costs for subscription apps is to offer free downloads or extend freemium capabilities. Downloads are a vanity metric, but some people eventually pay and new users keep the app’s lifeblood moving even if they complicate the lifetime value (LTV) calculations.

Oh, and speaking of – don’t forget to rethink your LTV ratings. The LTV value of an app’s core active user base is a more important benchmark than the LTV of the average potential user (which is much lower). Developers must narrow their scope on iO since they no longer have scaled targeting data.

Pro tip: Focus on adding “locals” (users who stick around and contribute to the app’s community) rather than “tourists,” and you can add fewer customers at higher acquisition rates and still net out more profitably.

How to hit the top on each social media platform. [Axios]

Niantic sells its vision for a metaverse that isn’t a dystopian nightmare in its first-ever ad campaign. [FastCo]

Mapping a new world order at Condé Nast. [Off the Record]

McKinsey: The value of getting personalization right – or wrong – is multiplying. [blog]

Measurement company iSpot is building out its data sources through an integration with Blockgraph, the data consortium from Comcast, Charter and Viacom. [Broadcasting & Cable]

Spotify rolls out podcast ads in the US via its self-serve ad studio. [Adweek]