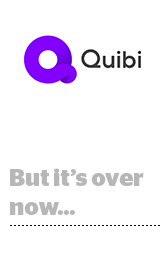 Quibi will shut down its service a mere six months after launch, becoming one of the first – and most spectacular – casualties in the video streaming wars. It is a remarkable flameout for a company that had raised $1.75 billion before it even began streaming mobile short-form videos to customers in April. But despite its high-profile founders, Jeffrey Katzenberg and Meg Whitman, the service appeared to have had problems from the start, including big-name advertisers pushing for new deal terms due to disappointing viewership and download numbers. While Katzenberg blamed the pandemic for Quibi’s underperformance, the troubles clearly ran deeper. The company recently hired a restructuring firm after it began exploring a sale, which didn’t go far because Quibi doesn’t actually own the shows available on its platform. The firm recommended several paths forward for Quibi to its board of directors, and now we know which option it chose. The Wall Street Journal has more.

Neat As A Pin

On the same day that several investment firms upgraded its surging stock to “buy,” Pinterest made moves to keep its platform safe, positive and more inclusive. For starters, the company has made a commitment for half of the managed creators it works with to come from underrepresented groups. And, in the coming weeks, advertisers, retailers and creators will be able to self-identify as part of an unrepresented group, which will push their content into Pinterest’s Today, Shopping Spotlights and The Pinterest Shop. Read the release. In other news, Pinterest also joins brands such as Danone, McDonald’s and P&G as a member of the WFA-led Global Alliance for Responsible Media (GARM). “Joining GARM elevates our work from an effort on our platform to an industry collaboration with the top advertisers, agencies, publishers and platforms to advance responsible media online,” Meredith Guerriero, Pinterest’s head of US partnerships, said in a blog post Wednesday.

A measurement and ad services company that got shut down by Facebook earlier this month over allegations of data scraping is fighting back. On Oct. 1, Facebook sued BrandTotal, an Israeli company that positions itself as the Nielsen of social media, for allegedly violating its terms of service, MediaPost reports. Facebook also took steps to ban the company’s UpVoice browser extension, which lets users earn money in exchange for tracking their social media activity. On top of that, Facebook demanded that Google remove UpVoice from the Chrome Web Store. Late last week, BrandTotal requested a restraining order that would require Facebook to stop blocking its service and rescind the takedown notice sent to Google. “Facebook’s complaint brazenly labels the UpVoice browser extension ‘malicious’ with no explanation,” BrandTotal wrote in papers filed with a US district court judge in Northern California. The judge is scheduled to consider BrandTotal’s request at a hearing on Oct. 26.