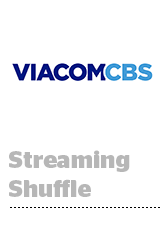 Do The Streaming Shuffle

Another day, another streaming reorg. Just days after Disney announced a major reorganization centered on streaming, ViacomCBS is shaking up its business with a focus on digital. The biggest change, The Verge reports, comes with the promotion of Tom Ryan, head of ViacomCBS’ ad-supported streaming service Pluto TV, who will become CEO of ViacomCBS Streaming. But as Ryan rises, ViacomCBS chief digital officer Marc DeBevoise will step down. DeBevoise had helmed streaming and digital products for ViacomCBS since 2016 and oversaw the launch of CBS All Access. This is the second executive shuffle at ViacomCBS in less than a year. In 2019, the broadcaster shook up its creative executive ranks in preparation for the Viacom/CBS merger. Streaming is becoming a massive focus for broadcasters across the board. In addition to ViacomCBS and Disney, WarnerMedia and NBCU have both recently undergone their own games of executive musical chairs in the name of streaming.

P&G had a great fiscal Q1, with net sales up 9% YoY to $19.1 billion. The CPG giant optimistically raised its sales growth guidance from 1% to 3% to between 3% and 4%, though with the pandemic still surging (and likely to surge even more), the caveat is that P&G, like everyone else, still faces a lot of unknowns. “Against this challenging backdrop, we’re still holding ourselves to an expectation of meaningful growth, top line and bottom line, and expect to be highly cash generative,” said CFO Jon Moeller during the call. Moeller also addressed the extent to which changing consumer habits will permanently impact the way P&G does business. “Consumer habits, once they’re established in our categories, are rarely reversed,” he said. “I’m sure there’ll be some level of reversion, but we do expect a permanent change at some level as well.” Also, P&G is also rolling along with ecommerce, where sales grew 50% in the quarter and now constitute about 11% to 12% of P&G’s total. And, finally, according to AdAge, P&G increased its marketing spend last quarter by “at least $100 million.”

CNN honcho Jeff Zucker’s contract isn’t up for another year, but “many people” think he’ll leave after the presidential election, according to The Information. But there’s another reason that now might be an opportune time to exit the spotlight. WarnerMedia CEO Jason Kilar is in the midst of transforming the entire division in order to focus on digital and DTC initiatives. Plus, Kilar has publicly said he wants more diversity within the WarnerMedia executive ranks. The Information provides a rundown on who might replace Zucker, assuming Zucker does leave. Candidates include The New York Times managing editor Rebecca Blumenstein; Rashida Jones, SVP at NBC News and MSNBC; and Lydia Polgreen, head of content at Spotify’s Gimlet.