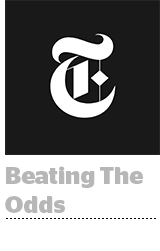 While digital media suffers a blood bath, The New York Times is reaping the rewards of a growing digital readership. The publisher brought in $709 million in digital revenue last year and is on track to pass its goal of $800 million in digital revenue by 2020, said CEO Mark Thompson on the company’s earnings call. The Times has more than 3.3 million digital subscribers, up 27% from 2017. And digital ad revenue grew 18% to $259 million in 2018, surpassing print for the first time in Q4. With sound financials, the leading paper will grow its newsroom while many rivals are cutting back (and many reporters are looking for a gig). “Our appeal to subscribers – and to the world’s leading advertisers – depends more than anything on the quality of our journalism,” Thompson said in a statement. More at NYT.

Consolidation of DTC startups appears to be gaining steam, almost three years after Unilever made a splash in the category with its $1 billion deal for Dollar Shave Club. The big CPGs are looking for value buys or specific audiences, and aren’t breaking the bank for a trendy brand. Unilever bought the DTC snack box company Graze for almost $200 million, half the original asking price for the startup, which struggled outside the United Kingdom, Sky News reports. In December 2018, Procter & Gamble acquired the DTC company Walker & Company, which specializes in hair and beauty products for people of color, and this week it announced a deal for the subscription feminine care brand This is L. “The P&G acquisition is a harbinger of things to come,” TechCrunch writes. “The combination of a non-technical, female founder operating in the consumer packaged goods market with a mission-driven company was an anomaly in the Silicon Valley of four years ago.”

Publicis Groupe dragged down holding company stocks across the board Thursday when it reported organic sales fell 0.3% to $2.85 billion in Q4. Analysts had forecast 2.5% growth. The revenue figure accounts for the divestitures Publicis made in its healthcare business in January. The soft quarter was due to a larger than expected pull back on spend from consumer goods clients, which have been cutting back on agency fees for the past two to three years, and make up 25% of Publicis’ revenue. North America was particularly weak. The holding company is still targeting 4% organic growth by 2020 but warned in an earnings release that it will be a “bumpy ride.” Stocks were down as much as 7% upon the news. Read it.