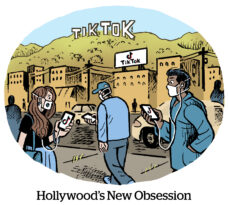 If you were on Instagram, Twitter, Snapchat or TikTok last week, you probably saw the Spotify Wrapped feature, an annual breakdown of each user’s most listened to songs and programs for the year. That roundup is then shared on social media, with captions like, “Spotify thinks I need therapy.”

Every year, Spotify faces some privacy flak because of Wrapped. But it’s a viral hit.

For big platforms with strong first-party consumer or audience data, demonstrating their powers of personalization can come across as fun or even intimate – a brag about how much a part of people’s lives the service is – rather than as a blatant overstep.

Hulu is inviting the same critiques (and viral engagement) with the launch on Thursday of its own content marketing ploy, dubbed “Your TV DNA,” which gives subscribers a breakdown of their streaming entertainment habits in 2021. Your TV DNA is actually just a portal that suggests Hulu original shows you’ve never seen before.

But if Hulu’s campaign gets embroiled in a privacy controversy, maybe the site will see some traffic.

The United Talent Agency, which represents Hollywood entertainers and athletes, bought the marketing and media consultancy MediaLink from Ascential for $125 million.

Ascential, which operates the Cannes Lions advertising festival and other events, acquired MediaLink in 2017 – which at the time was expected to net out to about $121 million with the incentives baked in.

United Talent Agency is an upstart among Hollywood agencies. It’s “only” 30 years old, and over the past decade, the group has invested in more brand-building and digital marketing services.

The differences between movie stars, TV show actresses and YouTube sensations have started to diminish. Actors and sports stars are creating more online and streaming content and podcasts, often working directly with a brand and their talent agency, The Wall Street Journal reports.

Talent firms are also increasingly pairing brands with performers and creators – both A-list celebs and digital-native personalities – as well as working with advertisers on creating entertainment programming as consumers become harder to reach with the rise of SVOD.

Reddit has (not so) confidentially filed for an IPO, TechCrunch reports.

The company kicked off 2021 in the spotlight because a subreddit for investment speculation wildly drove up the stock prices of several old-school companies, including GameStop and AMC. Since then, Reddit brought on its first CFO and raised $410 million in August at a $10 billion valuation. Reddit has raised $1.3 billion total.

Nothing is set in stone – a pre-IPO often leads nowhere. It’s also unclear what this would mean for advertisers. Reddit broke $100 million in quarterly ad revenue for the first time in Q2 – but it also recently dropped all programmatic ads on its platform.

To be fair, Reddit’s not a great fit for programmatic, since it’s jam-packed with user-generated content, which makes it hard to control for brand safety. “Programmatic ads are no longer allowed on Reddit,” reads the company’s Ads.txt page. “Advertise on Reddit via signing up on ads.reddit.com or via Reddit’s ads managed services.”

Are personalized ads a waste of money? [HBR]

Corey Quinn: AWS is too big to fail. [The Information]