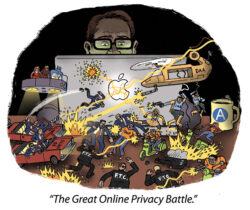 An Axe To Grindr

Norway’s data protection authority (DPA) fined Grindr $7 million for GDPR violations. The Norwegian watchdog says Grindr passed data to third parties without consent, and that it shared data on sexual orientation, which is prohibited regardless. The full text is worth reading.

Grindr, an LGBTQ dating app, objected on the grounds that the DPA targeted its former consent management platform (CMP) from before July 2019, and claimed the app only sent generic keywords like “gay,” “bi” and “bi-curious.”

The Norwegian DPA cites (then Twitter’s, now AppLovin’s) MoPub, Xandr, Smaato, AdColony and OpenX as the third parties that allegedly passed data without proper consent. Grindr told authorities that it considered OpenX to be a data processor on its behalf as opposed to MoPub and AdColony, which it treated as separate data controllers.

The ad tech vendors themselves aren’t under fire by the Norwegian regulator. But IAB Europe’s Transparency and Consent Framework, the industry solution by which those vendors collect consent data in the bidstream, is expected to be found to be in breach of GDPR by the Belgian DPA. That investigation hinged on the IAB Europe’s being classified as the TCF’s data controller, rather than a processor.

Podcast advertising is mainly associated with host-read testimonials that dole out show-specific promo codes. These types of ads helped turn Casper, Mailchimp and Manscaped into brand names synonymous with podcasting.

But as the biggest podcasters sign exclusive deals with mega-publishers like Spotify, DR ad buyers are getting shut out, The Verge reports.

Brands used to enjoy the privilege of being just one of a few sponsors for a show and the luxury of long host reads. But now podcast inventory is going way more programmatic and, as a result, many advertisers are paying more for less time. They’re seeing much higher CPMs and their messages don’t have the same impact.

Smaller advertisers used to bank on personal relationships with their partners, who would offer advice on how to market to their audiences and allow advertisers to tweak their ad messages over the course of a campaign. Now, larger brands with more money to spend on programmatic ads win.

Some of the most ubiquitous advertisers in podcasting may be left with no choice but to take their promo codes to smaller, up-and-coming shows.

A World Of Good It Does

Platforms are still struggling to filter climate change misinformation – but there are some things companies can do to keep their brands trustworthy in the eyes of the consumer, Adweek reports.

Twitter, for instance, released what it calls “pre-bunks,” or hubs of credible content on climate change that it promotes on its app, and Meta rolled out a fact-checking initiative for Facebook. But these strategies don’t actually correct or remove falsehoods.

In the meantime, climate communications experts say “marketing for good” can help build brand trust. That includes making sure climate-friendly promos aren’t completely at odds with other parts of a company’s business model. Buzzwords like “lower carbon” and “reducing emissions” can be misleading when they’re being used by players in the fossil fuel industry.

And therein lies the rub: Climate change deniers can also read the research. Ads for fossil fuel producers are replete with keywords such as “lower carbon,” “reducing methane emissions” and “net-zero emissions” as a way to get around the rules.

American retail and commerce spending rose only 0.3% in November, per Commerce Department data – though retailers had hoped for big early shopping returns. [WSJ]

One-third of agency and advertiser execs plan to leave their job within two years. [MediaPost]