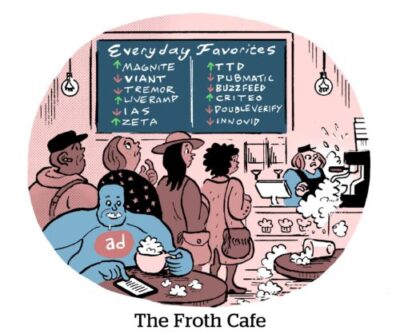 Snap warned investors this week that it will miss its one-month-old revenue target, tumbling shares by more than 40% in what may be a harbinger for the industry, CNBC reports.

“Since we issued guidance on April 21, 2022, the macroeconomic environment has deteriorated further and faster than anticipated,” says Snap in an SEC filing.

The ripple effects from Snap’s filing were immediate: Meta shares slipped 8%, Pinterest sank 21% and Roku dipped 15%. Ad tech fell, too, with The Trade Desk down at one point 15% and PubMatic by 14%.

“We expect all online ad platforms to feel some impact of a significant consumer pullback,” Morgan Stanley analysts told investors. “Advertising is cyclical.”

But were other factors at play in Snap’s declining fortunes? Mobile Dev Memo’s Eric Seufert thinks there may be more to the story, namely Apple’s AppTrackingTransparency (ATT) policy. Did Snap have to tweak its modeling or measurement infrastructure in response to ATT, dragging down revenue? Hard to say, but one thing is certain, Seufert says: There are more shoes left to drop with ATT.

Out In The Open

Facebook parent Meta is no stranger to calls for more transparency. Now it’s giving researchers data access they’ve been asking for: detailed information about how the platform targets users based on their political and cultural affiliations.

Targeting data for social issues, electoral or political ads will be available to academic researchers through the Facebook Open Research and Transparency (FORM) environment, The Drum reports. Meta will also open its Ad Library tool so researchers can investigate whether ads purchased in the past used specific targeting.

For example, researchers could determine whether an advertiser targeted people who live in specific regions and who are interested in politics.

“By making advertiser targeting criteria available for analysis and reporting on ads run about social issues, elections and politics, we hope to help people better understand the practices used to reach potential voters on our technologies,” says Jeff King, Meta’s VP of business integrity, in a statement.

Will Shoppable Be Watchable?

Firework started out as a social video app but ditched the initial pitch. Why go up against Facebookagram and TikTok on the consumer front when you can sell the underlying tech to brands and retailers instead?

The startup’s differentiator is to leverage live video for sales without going through Meta, Amazon, Google and YouTube, which all have live, shoppable video products … but also control the customer data. If Heinz can get viewers to its own site to stream and shop, it owns the first-party data set. (Heinz isn’t a random example; the brand worked with Firework to sell Halloween-themed merch last year.)

“It is going to be really tough to convince that audience to gravitate toward watching live video and live shopping on another niche platform,” Insider Intelligence Senior Analyst Blake Droesch tells the Journal.

Investors are optimistic, at least. Firework raised $55 million last November at a $230 million valuation – although American Express, the lead investor in 2021, had advantageous terms because it can distribute Firework to its small business merchants.

Google Maps workers say they can’t afford the trip back to the office. [NYT]