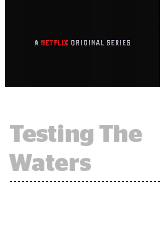 Netflix is testing promo ads between episodes with some European users. Netflix subscribers in the UK started seeing unskippable units suggesting other shows they might like, which bubbled up on Reddit and were first reported by Cord Cutters News. Netflix already runs similar targeted promos for Netflix Originals after a user finishes a related original show. The new promos primarily promote Netflix original content but play after episodes of outside content. Running show promos is a far cry from standing up an advertising business, but even small steps are important considering the potential – and, in some cases, the expectations – for Netflix to get into ads and promotions. More.

Google clarified the language in its privacy policy after an Associated Press investigation revealed the tech giant still tracks users’ smartphones even after they explicitly opt out of location tracking. The platform’s help page for location settings now more accurately says: “This setting does not affect other location services on your device. … Some location data may be saved as part of your activity on other services, like Search and Maps.” While experts say Google’s word change is a step in the right direction, the fact that the company stores location data in multiple ways is unusual and creates confusion for consumers. Google is also still bound by a 2011 consent decree with the Federal Trade Commission that fast-tracks investigations into consumer privacy policy complaints. More.

Political targeting on Facebook is coming under tougher scrutiny in the US and Europe. Last month, a British parliamentary committee criticized the “relentless targeting of hyper-partisan views, which play to the fears and prejudices of people, in order to influence their voting plans and their behavior.” Facebook has made strides in adding transparency and limiting malicious electoral influence campaigns, but the company’s unique position makes it a focus for government agencies. “Facebook’s gargantuan reach, vast holdings of user data and easy-to-use self-service advertising system have made it a lightning rod,” writes The New York Times. More.

Car makers extract beaucoup data from cars with built-in connectivity. To date, that data has been used for improving car performance and sending alerts. “But many car makers have bigger plans, including using the data to craft targeted in-car advertisements or selling it to mapping firms looking to provide more accurate traffic information,” reports The Wall Street Journal. McKinsey & Co. projects connected car data will be a $750 billion market by 2030. Auto companies are already working on deals with major mobile platforms like Netflix, Spotify and Pandora, not to mention mapping services, local recommendation apps and search engines. “A lot of the reason an app or service in a car may be free is because you’re paying with your data,” says Mark Boyadjis, IHS’s analyst who leads connected car research. More.