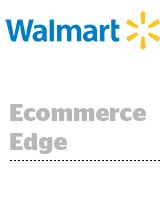 Walmart stock jumped almost 10% on Thursday after the world’s biggest retailer reported better-than-expected in-store and ecommerce sales, up 40% from the same period last year. It’s the most sales growth from the company in a decade. Walmart’s efforts to bolster grocery shopping appear to be paying dividends. “Walmart’s online grocery strategy has required the company to combine its vast inventory with a digital infrastructure that has often been less than inspiring to customers,” writes The New York Times. Some of those grocery initiatives include home delivery and curbside pick-up. And other tweaks have indirectly served the grocery business, such as last year when Walmart began offering discounts on home products like furniture or electronics bought online and picked up in-store. A Walmart source told AdExchanger at the time that the discount policy was meant to boost grocery sales by getting customers to combine offline purchases with high-volume grocery shopping typically made at a store. More.

About 72% of US households have a connected TV. But the ad spend ain’t there yet, according to eMarketer. And the issue is, in a word, fragmentation. Read AdExchanger coverage about that issue here. Not to worry, though, says eMarketer principal analyst Paul Verna: “Since consumer adoption of connected TV is faster than many had expected, it seems only a matter of time before ad spending catches up.” If anything, 2018 is the year when broadcasters, telcos and content owners are gearing up for connected TV. To name just a few, AMC Networks is testing addressable inventory, NCC Media is staffing up its data expertise, Viacom is using Comcast data to improve its addressable targeting and Altice boosted its addressable capabilities with Vizio data. More.

Flip Of The Coinbase

The cryptocurrency exchange Coinbase, one of the biggest blockchain-based tech startups, acquired the decentralized identity company Distributed Systems on Wednesday. The deal terms weren’t disclosed, but the five-person startup was also considering selling to Facebook, CEO Nikhil Srinivasan tells TechCrunch. Why would Facebook and Coinbase be interested in buying the same company? The Coinbase blog post announcing the news provides some rationale. “One of the reasons a lot of technologists who are thinking about digital identities are drawn to crypto, and specifically why I wanted to join Coinbase, is because blockchains can offer new answers to the question: how can technology empower individuals to have control of their identities and feel safe while experiencing and accomplishing more online?” writes Brennan Byrne, Coinbase’s product manager for identity. More.

Twitch has an itch to expand its audience and grab market share from YouTube, long the king of ad-supported online video. The Amazon-owned live-streaming platform has its roots in gaming, but in recent months it’s been trying to scoop up exclusive live-streaming deals with dozens of well-known YouTube personalities. Twitch is sweetening the deal with a lot of dough – in some cases multiple millions a year and a share of future ad sales and subscription revenue, according to a Bloomberg report. And the company’s CEO, Emmett Shear, is ambitious. At a recent staff meeting he set a $1 billion ad sales target for Twitch, which is more than double current sales. This is still a David and Goliath story, though. YouTube has around 1.9 billion monthly viewers, while Twitch gets about 15 million. But “YouTube is pretty nervous,” said Chad Stoller, chief innovation officer at UM Global. More.