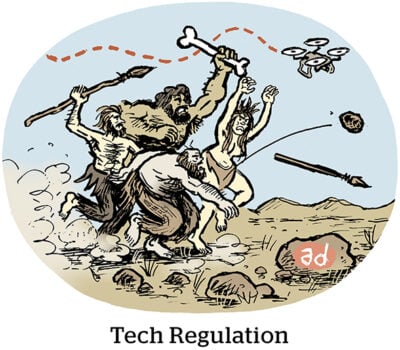 When the National Telecommunications and Information Administration (NTIA) asked what tech companies thought of Apple, Meta happily chimed in.

Meta, which has lost billions of dollars due to Apple’s new tracking prompt, says its ability to innovate has been hampered by Apple’s privacy changes on iOS, Ad Age reports. Meta also made a connection between Apple’s ad biz growth and Meta’s challenges in the same market. “Apple’s ads business has already witnessed ‘explosive growth’ as ATT has hobbled its competitors,” Meta tells the NTIA in a letter.

But what can this government agency, whose main priorities are to manage federal spectrum use and advise the president on telecommunications and information policy issues, do about it?

It’s unclear what action this branch could take. Overlapping complaints pile up across multiple government agencies, which themselves are often at odds with each other and vary in their capacity to censure a tech company or impact its actions.

Still, Meta appeared more than happy for an opportunity to gripe about Apple.

“Despite having some of the most popular apps in the world,” Meta wrote in its statement to the NTIA, “Meta’s ability to innovate on its products and services and even reach its customers is determined, and in some cases, significantly limited, by the most popular mobile operating systems, such as Apple’s iOS.”

The antitrust target on Google’s back keeps getting bigger. The UK’s competition watchdog has launched a second antitrust investigation of Google’s digital ad practices to determine if the company’s market dominance distorts competition, CNBC reports.

The Competition and Markets Authority (CMA) will specifically probe whether Google improperly favors its own ad exchange at the expense of competitors. It also wants to know if the company uses its exchange to disadvantage third-party ad servers.

“Weakening competition in this area could reduce the ad revenues of publishers, who may be forced to compromise the quality of their content to cut costs or put their content behind paywalls,” CMA Chief Executive Andrea Coscelli says in a statement.

The CMA is separately investigating Google’s Jedi Blue scheme, a secret 2018 pact between Google and Meta in which the two allegedly conspired to manipulate online ad auctions and kill off header bidding as an independent ad tech product.

The latest probe comes just a week after a bipartisan group of senators introduced a bill that, if passed as written, would force Google to break its ad businesses into pieces.

California caught the digital media industry flat-footed in 2018 when its privacy law kickstarted a trend of state-level legislation. But since then, Big Tech companies and industry associations are campaigning together to water down and stymie the new laws, The Markup reports.

In February, Microsoft and four trade groups it supports – the ANA, the Digital Advertising Alliance, the IAB and the Network Advertising Initiative – petitioned the Alaska legislature while lawmakers were considering new privacy laws. The bill has been stalled ever since.

In Minnesota, two experts invited to testify on the state’s proposed privacy law were presented as neutral subject matter experts to lawmakers when they were in fact associated with groups that get a good chunk of funding from the tech industry. Something similar happened in Virginia.

“The data privacy advocacy groups were totally unprepared and asleep at the switch as this legislation was going down,” said Virginia State Senator Dave Marsden, sponsor of a Virginia privacy bill that was effectively softened by tech lobbyists.

“I think the public is largely indifferent to data privacy things,” Marsden said. “It’s just an annoyance that a lot of people are willing to put up with.”

The Trade Desk gains after reaffirming its Q2 guidance on revenue and EBITDA. [Seeking Alpha]