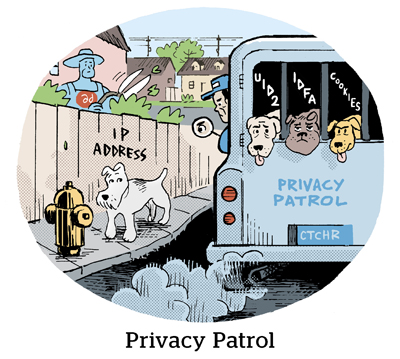 To reconcile business goals with privacy risks, ad tech must weigh the pros and cons of what could go wrong, with the greatest threat being “the risk of re-identification,” Lee said.

Ironically (and, perhaps, unsurprisingly), the tighter the clampdown on data collection, the more the industry flounders to find data elsewhere, despite the broader shift toward aggregate audiences and cohort-based targeting.

Fingerprinting, in particular, is the elephant in the room. It just doesn’t pass the privacy sniff test. But it’s hard to enforce compliance, which is why, at least for now, Apple’s ATT only prohibits the practice on paper.

What’s good for business doesn’t have to be bad for privacy, but that’s unfortunately often been the case.

Research by the advocacy group Human Rights Watch has found that many educational tech services, which exploded in usage during the pandemic, share data and advertising with nearly 200 ad tech companies, The Washington Post reports.

School districts say the report lacks nuance. Many advertising and tracking tags are placed on the homepages of the edtech companies in question, which use trackers for site analytics and prospecting. The internal parts of the sites used by students don’t typically carry the same trackers.

Even so, the privacy policies on these sites and services are too nuanced and confusing for parents and students. For instance, one education app noted it uses ad tech and site data to serve targeted ads on its own site, but doesn’t provide ad IDs or student data to ad vendors or advertisers.

That nuance didn’t impress lead researcher Hye Jung Han, who notes in the study that “children were just as likely to be surveilled in their virtual classrooms as adults shopping in the world’s largest virtual malls.”

There’s a lot of potential upside: One nano influencer Insider spoke to earned $10,000 in brand deals in a month.

One reason brands are so attracted to nano influencers is because they charge lower rates than big-name influencers. For example, after the NCAA lifted its restrictions last year, a growing number of sponsors started looking to strike deals with college athletes who have thousands (as opposed to millions) of followers.

Twitter will pay $150 million to resolve a joint lawsuit from the DOJ and FTC over allegedly misusing contact information for targeted advertising. [The Hollywood Reporter]

Have we reached peak Plus? Streaming service NFL+ is set to debut in July. [Adweek]

Havas Media is integrating with LiveRamp so the agency can create addressable audience segments based on first-party, second-party and third-party data. [MediaPost]

The war in Ukraine demonstrates the need for a global data privacy agreement. [WSJ]