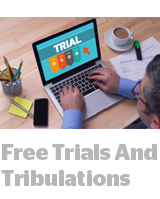 There’s a lot of gambling going on among media and subscription-based companies trying to hedge short-term revenue losses with potential new – and hopefully loyal – users. Dish, for example, announced Thursday that it’s offering free trials for Sling TV, while Peloton launched a 90-day free trial for its workout classes. Workplace tech providers Slack, Microsoft and Google all created more generous freemium products in response to the surge in demand. The same dynamic is playing out at news companies, such as The New York Times and The Wall Street Journal, that have loosened their paywall rules. And the stickiest subscriptions don’t need the help. Netflix will see a spike without cutting its price, because it’s the first port of call for work-from-homers considering a new streaming service. Publishers at least get to monetize traffic they let past their paywalls, plus it freshens their potential subscriber funnel. Zoom is also one of the major business beneficiaries of the pandemic with massive increases in engagement and total account growth. Granted, Zoom is also adding tons of free users who opt for the discounted trial version while it must still shoulder heavy network expenses to host that traffic.

Facebook and Google stand to lose $44 billion in ad revenue this year due to COVID-19, according to estimates from analysts at Cowen & Co. Of course, the two companies will still be very profitable, even if they experience double-digit drops in ad revenue, Variety reports. Google’s total net ad revenue is expected to clock in at $127.5 billion, down by 18%, or $28.6 billion, from prior projections. And Facebook will pull in $67.8 billion in revenue this year, down 19%, or $15.7 billion, Cowen predicts. Facebook acknowledged it would see declines in revenue due to decreased ad investment in a blog post Tuesday, despite an increase in messaging on the platform by 50% over the last month. Both Google and Facebook will snap back to their normal growth rates in 2021, Cowen predicts, and will still bring in $54.3 billion and $33.7 billion in operating income in 2020, respectively. More.

Everyone understands that travel advertising has evaporated, but one tangible example is the new look for Google search pages. In recent years, Google launched flight and hotel booking products that sit atop search pages. But with travel ads now “largely missing from Google Search, the silver lining is that organic links from the likes of Tripadvisor, Booking.com, and Expedia are newly visible right below the ‘fold’ on desktop,” Skift reports. As a result, Google travel searches this month have been “almost unrecognizable” – except they are recognizable, as long as you cast your mind back. That’s pretty much what Google travel searching looked like in 2015 and 2016, before Google began actively funneling people into its own travel booking portal. More. Also, check out Skift’s roundup of tourism campaign examples that aren’t useless or tone-deaf.