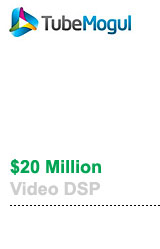 As video demand-side platform (DSP) TubeMogul looks to increase the amount of revenues it derives from real-time bidding, the company has taken a $20 million funding to help it maintain and enhance its two-year-old system. The proceeds will specifically go towards staffing up its global offices as well as technology investments. “We are proud to have built the most scalable platform for real-time video advertising out there — one that could easily run ten times the volume of ads than it does today,” said Brett Wilson, CEO and Co-Founder of TubeMogul. “With the product built out, we are focused on scaling the business to increase our global market share in the video advertising market.” Read the release.

Yesterday, Adobe announced the acquisition of Behance which allows creatives to showcase their skills and network – an interesting fit for Adobe which owns the de facto creative programs such as Photoshop and Illustrator. Indeed, Adobe calls Behance a “logical fit” and Scott Belsky, Behance’s CEO, explains how in The Next Web: “As creatives rely more on the social web for collaboration and opportunity, creative people and teams will benefit from Behance’s community features integrated into the creative process. We’re thrilled to join Adobe and empower creative careers on a global scale.” Read more about Adobe integrating Behance into is Creative Cloud.  With $6.5 million in funding, I’ll take a wild guess and say Behance sold for $30-35 million – not bad for a social publisher. (Update: TechCrunch says $150 million in cash and stock.. even better for a social publisher.)  A key component for Adobe will be (figuratively) tieing up Belsky and crew for the long-term. They are revered in the creative world. Behance’s “99% Conference” is a must-attend.

No Fun In Funnels

Funnels involve dividing consumers into various groups. BlueKai’s Cory Treffiletti, writing in Mediapost, argues against sending consumers down a funnel. Instead, he wants to emphasize taking consumers on a journey, as opposed to sorting them out like a prospector panning for gold. “The concept of the consumer journey is also not a new one, but I find it infinitely more relevant to what we do as marketers,” Treffiletti says. “A journey implies left turns and right turns — and if you’re targeting males, it implies they had to go back and retrace their tracks because they got lost and refused to stop and ask for directions.” Read more.

Domain blog Fusible says Facebook is about to re-tool its marketing image with clients via a virtual garage.  Fusible author “J.B.” quotes an unsuspecting Facebook designer’s website about a new FB initiative, the Facebook Publishing Garage, “a program geared at building world-class social publishing systems that enable brands to create the most meaningful connections with their connections and their friends through News Feed stories.”  Translation: teach marketers and agencies how to be better publishers on Facebook.com.  Read more.

After several earnings quarters of seeing its revenues dragged down by its struggling Motorola Home broadband unit, Google was finally able to find a buyer in broadband tech provider Arris. But as Techcrunch’s Anthony Ha points out, in return for a deal, the search giant promised Arris it would cap the liability on TiVo’s lawsuit against Motorola Mobility, the parent of Motorola Home. “It’s not something you have to worry about in terms of the financial impact on Arris,” said Arris CEO Bob Stanzione.“Google has taken that risk off the table for Arris.” Read the rest.

Doug Weaver briefly suspends his winter solstice meditations to tap a few “bon mots” regarding publisher pitfalls on the Upstream Group blog.  Weaver writes, “If you kept your product offering fairly current, sprinkled on some innovation and covered the agencies pretty well you could anticipate at least modest revenue growth on pace with the industry norms.  I think we can now declare that era officially over.”  Adapt now.