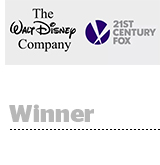 The bidding war between Comcast and Disney for 21st Century Fox’s entertainment assets has finally come to an end, with Comcast backing down after Disney’s $71.3 billion counterbid. Comcast will focus instead on beating Fox to acquire Sky, the British satellite TV network it hopes will give it a strong household footprint in Europe, Axios reports. “I’d like to congratulate Bob Iger and the team at Disney and commend the Murdoch family and Fox for creating such a desirable and respected company,” said Comcast Chairman and CEO Brian Roberts. With Fox, Disney gains a controlling stake in Hulu and can charge forward with plans for a streaming giant to compete with Netflix. More.

Data marketing company Epsilon has had a rough couple of years, and its Q2 2018 performance didn’t alleviate concerns. The company, a division of Alliance Data, brought in $514 million, down 5% year over year, mostly because its agency revenue dropped 20% due to CPG client losses. But given its consistently soft performance, Alliance Data might have to consider restructuring Epsilon or divesting some of its low-performing assets. When asked by an analyst, Alliance Data CEO Ed Heffernan acknowledged that board discussions that began a couple of years ago have intensified over the past year. “We are looking at all the assets of the company on a more intensive basis and as we move into the back half and look at the performance, if it’s there, that’s great,” he said during the earnings call. “If it’s only modest, there will be more pressure to do something. That’s as far as I can go.” Listen to the webcast.

Some demand-side platforms (DSP) are having trouble recognizing when consent for targeted ads has been transmitted by the publisher. Despite gaining high opt-in rates, some sites aren’t able to accept demand. Digital sports publisher GiveMeSport told Digiday it lost five figures in the past month, and one agency could only “see” an eighth of its inventory. The issue is that not all DSPs are using the same consent framework in a standardized way. Others think some publishers haven’t updated their consent management platforms to send the correct signal. “Exchanges are converting Google’s consent signals into IAB signals, and when you have all these different methodologies and companies trying to change the consent signal in real time, and there are billions of these happening at once – that can break a process and could affect a DSP’s ability to read,” an anonymous executive said. More.

“Television has been entitled,” said Marcien Jenckes, Comcast’s advertising president, at the company’s annual media summit in New York City. Jenckes said digital platforms have figured out how to run effective campaigns, and even as broadcasters figure out platform technology and data they still can’t build “TV’s easy button” because they need to coordinate across all the networks, Business Insider reports. Networks will have to collaborate in unprecedented ways, Jenckes said, or surrender more share to digital competition. “If we all do it differently, if we all do it fragmented, then the same thing is going to happen to every other form of advertising other than television at this point.” More.