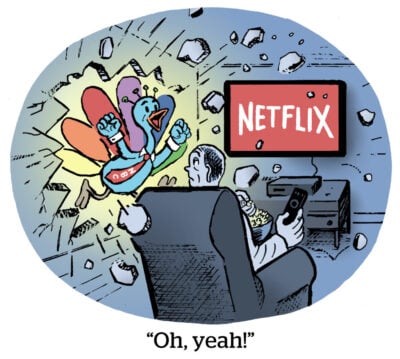 NBCUniversal says this year’s upfronts was its highest-grossing since Comcast acquired the programmer in 2013.

Unsurprisingly, streaming media helped break the record. Of NBCU’s $7 billion in ad commitments, per a release, $1 billion is earmarked for its AVOD service Peacock less than two years after its launch.

And NBCU said it saw “significant” category growth across pharma (up 40%), travel (up 30%) and broadcast entertainment, the NFL and multicultural segments (each up 20%).

This year was NBCU’s first upfront presentation since it became the most vocal, prominent backer of alternative currency systems (alternatives to Nielsen, that is). NBCU says 40% of its upfront deals will be “conducted outside traditional age and gender currency guarantees,” a euphemism for Nielsen.

“The results of this upfront say we’ve built the future our partners want,” Linda Yaccarino, chairman of global advertising and partnerships, says in a release.

Such Thing As A Free Lunch

The (relatively) smooth functioning of the internet is supported by a small army of volunteers – or, rather, unappreciated workers – who make everything work.

New York Times writer Shira Ovide cites research from Northwestern and the University of Minnesota that puts an estimated dollar figure on volunteer work by Reddit moderators, which they say clocks in at around $3.4 million collectively of unpaid work a year.

The difference between a good subreddit and a cruddy one is its moderator.

Facebook, Nextdoor, Discord and Yelp are other platforms that rely heavily on volunteers.

But there are also other folks beyond power users and moderators who keep the internet chugging without compensation.

Computer scientists and developers who are deeply committed to open-source technologies dedicate a heck of a lot of time to developing internal protocols at the W3C. That’s in addition to, you know, their day jobs.

In other news, Google announced just this week that it will begin paying for its use of Wikipedia, which is a go-to for its search engine – and another example of a platform to which volunteers contribute millions, if not billions, of dollars in value for major tech platforms.

“If we volunteered at a food bank and the food bank were monetizing our volunteer hours, I don’t think people would come back,” says Hanlin Li, the doctoral candidate who led the Northwestern and UMN research.

The Price You Pay

CMOs are shifting ad spend from upper-funnel to lower-funnel deals, and so publishers are testing alternate pricing models in pursuit of low-funnel business, according to Digiday.

Cost-per-acquisition (CPA) pricing is standard in affiliate commerce. But CPA revenues aren’t guaranteed, and publishers don’t get paid if a reader doesn’t convert directly. But publishers do tend to earn more from CPA commissions than from click-based fees.

Under a cost-per-click (CPC) model, publishers collect a referral fee when a reader clicks through to a brand’s site. Referral fees are typically smaller than what publishers collect from affiliate purchases, but referrals don’t require a reader to complete a purchase. CPC models appeal to brands whose marketing budgets can’t support paying commissions on each transaction. But CPC deals only yield an average of $3,000 to $5,000 per month.

In a flat fee model, the publisher enters a direct deal with a retailer to promote its products, and the publisher gets paid whether the products sell or not. On the other hand, the flat fee could amount to less revenue than would be earned through commissions or referrals.

It’s a tricky balance for publishers that are already scrabbling for sustainable profits … or profits at all.

Nexstar nears a deal to acquire majority control of the CW Network. [WSJ]

Advertising in a downturn: Strategies for a brutal budget season. [Ad Age]

Deleting your period tracker won’t protect you. [NYT] Also: Our data is a curse, with or without Roe. [NYT]

Manhattan is a playground for TikTok. [Garbage Day]

Habu continues its expansion with hires from Oracle and Epsilon. [release]

Sourcepoint hires a CTO and promotes from within for its new product chief. [release]