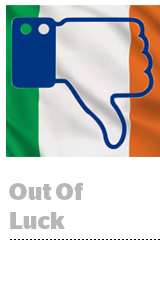 The Irish aren’t so lucky, at least not for Facebook, which could lose its ability to transfer data from the European Union to the US. On Friday, Ireland’s High Court issued a ruling that allows the country’s Data Protection Commission (DPC)  to continue with an investigation that might put the kibosh on transatlantic data transfers, Reuters reports. In August, the DPC, which is Facebook’s lead regulator in the EU, launched an inquiry and issued a provisional order which found that Facebook’s main mechanism for transferring data to the US “cannot be used in practice.” Facebook challenged the legitimacy of the inquiry overall and of the finding in particular, claiming that they could lead to “devastating” and “irreversible” consequences for its business, which relies heavily on processing user data to serve targeted ads. The High Court was not swayed. Welp.

Holdcos – hold onto your hats. The rise of digital platforms has “shattered the media ecosystem and paved the way for new firms,” Patrick Coffee writes at Business Insider. New agencies and networks, such as Jellyfish, You & Mr Jones, Dept, S4 Capital, Known and Plan A, are threatening the established agency names of Madison Avenue. Although holding companies, such as WPP, Omnicom and Publicis, still control mammoth brand budgets, newcomers are not only competing, they’re winning business. The rise of Google, Facebook and Amazon has enabled agencies to run campaigns with leaner operations, diluting the power historically wielded by the big guys. The pandemic only accelerated this trend as advertisers cut spending. On paper, the new kids on the block “look very appealing and relevant,” says Chris Sahota, CEO of M&A advisory firm Ciesco and a former IPG exec.

Remember back in 2019 when Amazon unveiled a bunch of new digital ad products to reach people who shop at its rather small footprint of brick-and-mortar AmazonFresh stores? Pundits predicted that it was only a matter of time before advertisers would be able to attribute in-store purchases made at Amazon-owned Whole Foods to the digital ads served on Amazon. Well, this February Amazon did just that and the move represents a new front in the ad war it’s waging against Walmart, which operates more than 11,000 stores worldwide. You might think that sort of offline presence gives Walmart a leg up – and it’s nothing to sniff at, especially when combined with Walmart’s new retail media network. But, as Digiday reports, Amazon has an advantage. Although ecommerce represents just a sliver of the overall retail pie, Amazon is expected to generate $367.2 billion in US ecommerce sales alone – far eclipsing Walmart’s project sales of (just) $64.6 billion.

Omnichannel personalization company Clinch, used by brands such as Chewy, AB InBev and Nespresso, has raised a $10 million Series A. [AiThority]

Facebook says it has developed an AI technique that enables machine learning models to only retain certain information while forgetting the rest. [VentureBeat]

Media agencies have higher levels of concern and lower levels of confidence in their post-cookie solutions than do brands and publishers. [Campaign Asia]

Google I/O, the company’s big developer conference, is back after being canceled last year due to the COVID-19 pandemic. Here’s what to expect. [The Verge]