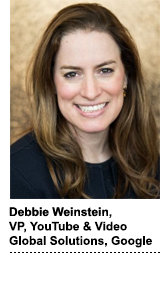 Here’s a stat to make your eyes bug out: YouTube personality MrBeast’s channel on YouTube has more subscribers than the largest ad-supported streaming services.

“In and of himself, MrBeast … has created a phenomenon, and his business really is a next-generation media company,” says Debbie Weinstein, VP of YouTube and video global solutions at Google, on this week’s episode of AdExchanger Talks. “He is a streaming service and he creates very expensive, highly produced content.”

While people don’t watch content just because of its high production value, MrBeast’s scale and the quality and quantity of his output is evidence of the blurring line between traditional TV content and streaming media. This blurring line is one of the main reason why YouTube decided to make its upfronts debut this year.

So, what was YouTube’s pitch to advertisers amid the razzle-dazzle of traditional upfronts events?

“The orientation [at the upfronts] was always around the fall schedule, quote, unquote,” Weinstein says. “But we’re launching a fall schedule basically every single day, and creators are bringing fresh content all the time.”

Also in this episode: Falling down the YouTube rabbit hole, learning to surf and YouTube’s big bet on short-form video.