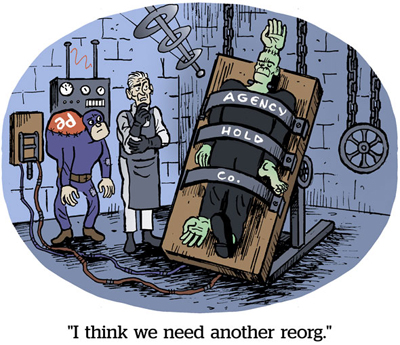 Amazon is a top-10 global ad business, and it’s been able to achieve that status without doing all the things that platforms typically do to butter up the guys with the budget (feting advertisers with open bars and hosting glitzy, star-studded events).

As recently as 2019, Amazon was a shark lurking mysteriously beneath the ad industry.

But that’s changing, Insider reports. The company is renting a huge stretch of waterfront in Cannes alongside the main theater, with spaces dedicated to Amazon Ads, AWS, Twitch and its podcast group Wondery. Oh, and there’s gonna be a Daft Punk concert.

It’s not all for show, either. Amazon has been wooing some of the best programmatic execs out there.

Gaming and commerce growth stories grab the headlines. But ad agencies haven’t been getting much attention for their good performance.

WPP grew 9% in Q1, Publicis saw 10% growth last year, and Dentsu did even better. IPG and Omnicom upped their 2022 outlooks.

Agencies were rumored to be toast due to programmatic in-housing, but they survived purported existential threats from the big consulting firms and maintained their position even as ad tech companies tried going direct to brands.

Yet agencies don’t get their due as adaptable survivors, writes Mike Shields.

In fact, multiple agency holdcos have launched commerce and consulting practices that, if anything, might outshine consultancies on their home turf, Shields writes.

And agencies take their own advice, as evidenced by their investments. Just look at Publicis Groupe’s acquisition of ecommerce analytics platform Profitero in early May.

And Amazon isn’t the only one on an ad tech hiring spree. Agencies such as Merkle and Essence have been hoovering up ad tech talent, as are newer performance agencies, such as WITHIN and Tinuiti.

Help You, Help Me

The Chrome Privacy Sandbox recently reached an important testing milestone. Half of the Chrome beta population – developers who sign up to participate in origin trials – are now eligible to test the sandbox proposals.

Now it’s time for Google to split these developers into two groups: a control group and experimental group.

But there’s a problem here, a Catch-22 of sorts for Google. The company needs a control group but it also needs as much inventory as possible to actively test the new APIs.

Google needs publishers and their tech vendors to play around in the Privacy Sandbox, but that’s a heavy lift for already time-starved folks.

But the challenge isn’t just about not having enough time in the day – some publishers are far from sold on the value of the Topics API. In fact, many are leaning away from it.

Oh, and Topics is also buggy.

Chrome relies on outside developers to vet the code for inevitable bugs, but they don’t catch everything. “It really depends if developers are able to identify the bug and whether they report it to us,” says Chrome privacy product lead Vinay Goel.

Many networks have announced trials of alternative measurements. But, despite the buzz, this year’s upfronts negotiations will largely still be made on Nielsen. [Ad Age]

Retailers, including Walmart and Dollar General, are working with more ad tech companies as they rush to cash in on retail media’s growth. [Insider]