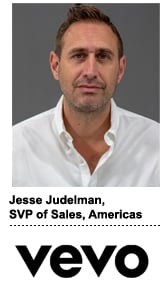 Music video hosting service Vevo has graduated from the smartphone to the living room.

At the start of the pandemic, just 4% of its business came from connected TV.

Vevo’s focus on CTV started several years ago, but it was only last year when the ad dollars really started to flow, said Jesse Judelman, SVP of sales for the Americas at Vevo. Historically most consumption had come via YouTube.

“As a premium video platform, we could always theoretically compete with the broadcast networks and other big video players,” he said. “But it’s the shift in viewership to TV screens that’s really helped expand the type of advertisers we typically work with.”

Vevo has 150 million monthly active users in the US.

AdExchanger: What are the first music videos you remember watching? Mine were “The Sign” by Ace of Base and Tom Petty’s “Last Dance With Mary Jane.”

JESSE JUDELMAN: It’s cliché to say “Video Killed The Radio Star,” and I was three when that came out anyway. The music videos that stick out to me are Duran Duran’s “Hungry Like the Wolf,” A-ha’s “Take on Me” and all of the seminal videos of that time from Madonna and Michael Jackson. For me, that generation of stars is synonymous with music videos.

What makes music a good environment for advertisers?

The content – the art form – is compelling entertainment. Music videos have been a chief driver of culture for the better part of 40 years.

In many ways we were previously relegated to certain segments of the advertising marketplace rather than being viewed holistically, and we were often considered to be a purely sponsorship sales organization and not at the top of the digital waterfall. Vevo was a natural place for audio brands and brands with a music focus, for example.

But there’s no reason why music content – and the influential stars who drive it – can’t be just as inspiring as last night’s television content.

How are you creating opportunities for advertisers, including non-endemic brands?

What we need to do, though, is [think] in terms of what messaging makes the most sense for our content in new entertainment environments.

One way is positioning ourselves as a place for advertisers that need mass scale to reach audiences in premium environments with storytelling. That’s a message which has really started to hit home with agencies as consumption moves into the living room. Agencies are seeing us as a part of a well-rounded entertainment advertising strategy.

People lean back to watch Netflix and Hulu. Do they really do the same for music videos?

The shift in consumption started about three years ago and we’ve encouraged it through our distribution partnerships, which have opened up the opportunity for us to be a hybrid content provider where on-demand and linear can coexist.

Mobile was the dominant screen for us for a long time, and it continues to be important, but the average session is between six and eight minutes there, because people are watching on the go. In the CTV environment, people will watch well north of 30 minutes per session and that brings us new opportunities from a programming perspective in terms of curation.

If we have a captive audience in CTV, we need to program for them and it’s a different strategy than we deployed on YouTube and mobile.

How important is contextual as a selling point?

Context is definitely a focus and it’s something we think needs to be reemphasized, which many of our recent ad products do.

Ad products such as?

People’s music tastes can be very eclectic, and we apply that knowledge to our products. We have a captive audience that we can slice and dice by taste, genre and sensibility.

For example, we have Moods, which uses AI to target ads to attitudes, and Vevo Rewind, which lets advertisers target the top music videos in a particular genre, decade or country. More recently, in June, we released a product called Afro Pulse that focuses on emerging Black artists.

Despite more watch time happening on TV screens, how dependent does Vevo remain on YouTube as a distribution channel?

YouTube is our foundation, but we’ve built off of that foundation and we’re growing. We’re creating a modern-day music television network, whether that’s on your TV set or your phone or any other distribution point.

Our advertising partners are looking for professionally produced music content in the AVOD space. It’s a need that hasn’t been fulfilled yet in a meaningful way and we’re glad to fill the void.