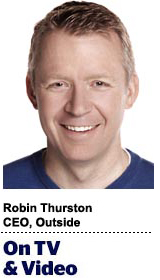 At a time when streaming platforms are working to boost their subscriber numbers with bundled ad-free and ad-supported channel packages, Outside TV is being used in part as a vehicle to entice viewers to subscribe to Outside Plus for a $99 per year subscription to access Outside’s active lifestyle video, digital and print media brands.

Outside TV is adding more original programming and live content. Its Outside TV Features streaming service launched in 2016 and includes feature films and original series for $4.99 per month.

Last month, Outside TV significantly increased its reach when it was made available on YouTube TV as part of the platform’s optional sports add-on package alongside the likes of NFL RedZone, FOX College Sports and FOX Soccer Plus. Outside TV also has distribution via Roku, Amazon Fire TV and smart TVs like Samsung and LG, as well as on iOS and Android.

Outside TV is also taking a page out of the big Hollywood studios’ playbook by releasing content for a limited run in theaters before it hits its streaming service. On Oct. 20, Warren Miller Entertainment will kick off a theatrical tour of its 72nd feature film, “Winter Starts Now,” before the ski and snowboarding documentary makes its way to Outside TV in November.

Can you chat about how Warren Miller Entertainment fits into Outside TV?

In TV, there’s a lot of what’s called windowing. When we first get a film, we might release it for free in linear as part of 24/7 programming or in a specific distribution channel like Roku. But then, after that window, we might make something available only to Outside Plus members.

Ultimately, if you’re a massive Warren Miller fan, you’re going to have to become an Outside Plus member to get it.

Warren Miller has a storied history, [being] distributed through the theater tour in 300-plus cities around the US.

We’ll still do a tour this year – and we have part of that [experience] bundled into Outside Plus – but I think where we’re headed in the future is there are certain films or documentaries that we will potentially acquire from a licensing perspective.

Like many others – whether it’s Discovery Plus, Disney or Netflix – we have to figure out: Is the value [of the content] in video on demand? Or is it the exclusivity? That the only place you can watch that content is in your premium, Outside Plus-member channel.

Where does Outside TV fit into that strategy?

Outside Plus has a single sign-on framework for all of our properties. Outside TV will soon come onto that framework, and you’ll be able to use your Outside Plus account, whether you’re on Outside Magazine or you’re on Yoga Journal.

Right now, about 70% of all of our sites are single sign-on. But we’re in the process of migrating our tool [apps] like Trailforks and Gaia. Soon, Outside TV will be part of that.

Whether it’s digital, magazine and web content or premium video, about 40% of everything we have at this point is going to be for Outside Plus only.

How is Outside TV being used by subscribers?

The old Outside TV model exclusively licensed content – they didn’t do a lot of original programming and they did very little live sports.

We’re doing all three now. We’re investing in original content. We’re really looking at all the categories we’re in. Maybe there should be a daily cooking show on Outside TV that really focuses on how to eat before a marathon?

It’s not our intention to push everything through CTV or a FAST channel or through linear. The idea is to use all those channels to get people to come back to us and potentially become an Outside Plus subscriber directly.

How do you sell ads on Outside TV? Is it a mix of direct and programmatic?

Most of what we’re selling is direct. We will fill inventory that we don’t use through programmatic.

How is YouTube TV helping Outside TV expand its reach?

It’s a little bit of a different demographic, and we’re seeing younger audiences come in through channels like YouTube.

Again, they will not – like any of our CTV partners – get 100% of the content. We’ll be using that opportunity [to be part of a distributor bundle] to connect to those customers as a way to onboard people to everything in the Outside portfolio.

Why is the bundle strategy important for Outside TV, particularly when it comes to fighting subscription fatigue?

In ecommerce, people just cannot get rid of Amazon Prime – it’s become so foundational to their existence. What we’re hoping – at least in the active lifestyle category – is that we can become this foundational subscription where people have to have Outside Plus.

We’re fortunate that we are not just a single video distribution platform. Having the magazines, the reach we have on web and social, and having commerce and utilities like Gaia and Trailforks, we can move people through those experiences. Maybe they do fatigue on Outside TV for a little bit, but they’re still reading one of the digital sites or they’re using one of the apps.

With cookies going away, I think being a vertical as deep as we are – with the knowledge of the customer base and as much first-party data as we have on the customer – we are going to be a net-net winner.

Technology always wins. That’s why we have to reinvent the model of subscription.