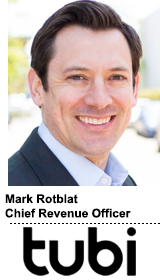 Tubi has been shouting from the rooftops about ad-supported streaming for years, and the market is finally listening.

“It’s pretty much understood that [brands] need to match their budgets to where the eyeballs are,” said Tubi’s chief revenue officer Mark Rotblat.

But brands aren’t the only ones taking notice of the growing AVOD opportunity. Fox acquired Tubi for $440 million in March, shortly after Comcast scooped up ad-supported streaming network Xumo in February and ViacomCBS bought Pluto TV in early 2019.

Tubi is already going to market with Fox during this year’s upfront negotiations, where it will pitch advertisers on joint opportunities across its AVOD network and Fox’s linear portfolio.

Tubi is making its inventory easy to buy on its own platform through programmatic, direct IOs and programmatic guaranteed buys. And it’s working on fixing frequency capping, a thorny issue in ad-supported streaming.

Viewership on the platform is spiking during the pandemic, with Tubi seeing 150% YoY increase in total viewing time in April. But Tubi will have to differentiate as the AVOD category heats up, with growing competition from Roku, Vizio, Amazon Prime and other platforms, as well as networks such as NBCU’s Peacock.

Rotblat caught up with AdExchanger.

AdExchanger: How are Tubi and Fox’s sales teams working together in this year’s upfront?

MARK ROTBLAT: The Tubi sales team remains in place, but we are one of the pillars in the Fox portfolio.

In just two months, our teams have gone to joint clients with one message. Holding companies want to have strategic, portfolio-level conversations. There is a low duplication of audiences from premium networks to Tubi.

The future will be about strengthening partnerships across the Fox portfolio, including Tubi, with sponsorships and custom packages. We’re going to work over the course of the next several quarters to establish these things.

It’s not a one-size-fits-all marketplace. Some [brands] want to be on the broadcast calendar. Others have different considerations. Maybe their businesses are different right now and will be for a couple of quarters. So we’re addressing that client by client.

There are so many AVOD services entering the market. How does Tubi stand out?

We’re still the largest free, ad-supported app with 100% movies and TV shows. Advertisers have brand safety concerns around running on user-generated content. Our content looks like TV. There’s comfort around that.

A lot of AVOD networks have professionally produced content. Why is Tubi safer?

Other free services have channels ranging from short-form news, to digital shows to things like the slow train channel, where you’re watching a train go around a track. There is all sorts of stuff out there in OTT, and some of it is not brand safe.

It really hasn’t changed. It tightens up for [shows such as] “Friends,” “The Office” and “Seinfeld,” where there are $500 million deals to take content out of certain services and move it to an O&O property.

But there’s probably a million titles out there. Even if you take away the top 1,000, there’s so much viewership going deep into our library that it wouldn’t be an issue. Our plan is only to grow that library.

We have an ad server, analytics and content management for OTT. We can be accessed through DSPs or SSPs directly. We work with OTT ad networks and local station groups. But over the last two years, we’ve moved from a primarily partner-driven business to heavily direct sold. A good portion of that is programmatic.

Tubi touted its direct integrations with DSPs and SSPs at its NewFront in June. Why is that important for buyers?

Digital buyers have been talking about getting closer to supply. What better way to do that than through a direct integration? Every time you have a data hop there can be match rate loss. There’s less technical troubleshooting when you’re talking directly to the DSP.

Buying from different sources can create higher repetition than intended because of content rights. Fox and Hulu both sell into Hulu, so that creates a frequency management problem. There’s really no way to solve it.

We transcode all of the ads that come to Tubi. If they’re coming from different sources, we can see if it’s the same creative and put them in a different pod.

We’re stepping that up by identifying logos and text. In the past, we knew if a video file was the same as another by scanning all of the frames, but we didn’t know the brand. Now we’re able to say this is a Geico ad coming from a DSP, and here it’s coming from the device’s ad network.

How are you keeping your ad loads low as more money flows into streaming?

Fortunately, Fox is not pressuring us to change our ad load. We don’t want to go more than six minutes per hour. Viewership is growing, so we can continue to grow revenue while maintaining low ad loads.

There’s a value exchange between time and money. People are willing to watch some ads for free content. But if you make that experience negative, it’s not worth it anymore. That has happened with many traditional TV properties.

Tubi’s CEO previously told me the service would never have originals or a subscription tier. Will that change as a part of Fox?

We’re still holding to that. We’re focused on free. There’s still so much to do in providing access to content people want.