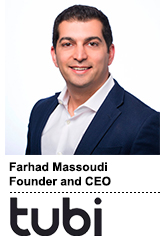 Tubi has no interest in becoming a subscription-video-on-demand (SVOD) service.

As giants like Netflix and Amazon Prime pour money into original content housed behind paywalls, Tubi wants to provide access to the world’s largest library of free, on-demand content. The 8-year-old, ad-supported video-on-demand (AVOD) network has more than 12,000 titles available across 18 streaming platforms.

The “free” value proposition speaks loudly to customers overloaded by subscription bundles. Tubi’s user base tripled last year, while total hours viewed on the platform increased by a factor of 4.3. The network focuses heavily on user experience, with one of the lightest ad loads in the industry of four to six minutes per hour, which is about a third of network TV, Massoudi said.

“It turns out if you have a super low ad load, the majority of people are OK with it,” he said. “There’s always a small percentage of users who don’t want to see any ads, and that’s OK. They don’t have to be our customers.”

With a heavy focus on tech, Tubi has built its own ad server, real-time bidding platform, analytics platform and personalization engine in house. The network has a large programmatic business that’s transacted through private marketplaces deals.

“Because a lot of platforms haven’t caught up with all the bells and whistles required to run OTT, building gives us an advantage to move fast,” Massoudi said.

AdExchanger: Why won’t Tubi ever go down the subscriptions or originals route?

FARHAD MASSOUDI: Median household income is about $60,000. Those people are not buying an avocado toast for $8, and they’re not getting HBO, Amazon, Netflix, Hulu and Showtime subscriptions. It’s just not going to happen.

We’re not by any means prescribing, “Don’t pay for TV.” What we offer is complementary. If you want to watch an original, you have so many good options on the subscription services. What we provide is access to everything else.

How does Tubi remain competitive with new entrants to the AVOD space, like Amazon Free Dive and The Roku Channel?

We have the largest library and the only one with a personalization engine. We use [viewer] data from Tubi to determine what to license and how to program. We’re about having as diverse a library as possible. It’s about what our viewers want to watch.

We only do one thing: free, on-demand TV. Having focus is important. We don’t do all the other things these companies do.

Why did Tubi build its own ad tech?

Having an in-house ad server allows us to do integrations with various parties, which we’ve been doing for the past eight years. As a result, we have access to data on anything from viewership to ad spend. We do a ton of work on how to improve the user experience with which ads to serve to which users and what’s the proper ad load. It would be incredibly difficult to do without all this in house.

Tubi is known for its light ad loads. How do you stay competitive while showing fewer ads?

It’s not effective when every 10 minutes, you have a five-minute commercial break. That makes the ads less effective and the user experience worse. That’s what we care the most about.

We charge a premium because of the lower ad load. But [we’re not doing it] to have a better ROI on ads. It’s meant to make a great user experience so we continue to grow our fan base.

It’s not cheap. Because we use data, we know how much we should pay for each piece of content. As our business has grown, we have a bigger budget to spend on content and we’re going to continue unlocking more.

A lot of companies in the space are essentially throwing money at this and increasing their burden every year. I don’t know if they’re looking for a Hail Mary moment for things to somehow reverse. It’s just going to get more and more expensive.

NBCU says it wants to air more AVOD content this year, and Viacom bought Pluto TV for $340 million in January. Are you looking to the networks for an exit?

I can’t comment on M&A, but I think media companies are realizing that the SVOD market is saturated and they don’t want to be yet another player. It speaks loudly to the AVOD opportunity. You’re going to hear a lot more about it in 2019.

Finally, people are listening to me.