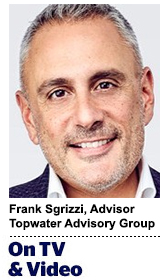 Today's column is by Frank Sgrizzi, Advisor, Topwater Advisory Group and former EVP of Sales and Client Partnerships at WarnerMedia.

"On TV & Video" is a column exploring opportunities and challenges in advanced TV and video.
Today's column is by Frank Sgrizzi, Advisor, Topwater Advisory Group and former EVP of Sales and Client Partnerships at WarnerMedia.

As another upfront season comes to an end, ad-supported streaming services and platforms command center stage as the most sought-after destinations in premium video content. More than $4.5 billion was committed to connected TV (CTV) advertising – an unprecedented sum that continues to grow.

Leading video publishers have spent billions building ad-supported video on demand (AVOD) services to recapture audiences and provide advertisers with the reach they need. But if you have watched ad-supported video recently, you have likely experienced the maddening repetition of a small number of ads.

It’s a very big problem in the industry, and it’s not technological – it is the result of an identity crisis. Computers can’t stop ad repetition because they can’t identify the ads themselves or resolve when two insertions are the same thing.

Interestingly, the solution to this media industry problem can be found in a historical example from a very different industry in a different century.

In the mid-1800s, the construction of the first transcontinental railroad created a nationwide transportation network that united the country by rail and became the driving force for the Industrial Revolution. Before transcontinental links were formed, railroads were constructed to serve cities and their surrounding areas, with little thought that these systems would eventually need to connect.

While locomotive design improved steadily during this period, less thought was given to the consistent track dimensions – “gauge width” – that would enable trains to transfer from one railway to another. Each rail system adopted its own gauge width, often based on preexisting tracks used to move coal by horse-pulled cars. As a result, cargo had to be unloaded from one track system and reloaded onto another as the cargo moved from city to city.

Can you imagine a more inefficient way for an industry to operate? Surprisingly, that’s exactly what the media industry has been doing since the early days of digital media. Despite the technological advancements in delivering content to consumers, we have overlooked the importance of the creative asset and our ability to properly identify it as it moves throughout the ecosystem.

Ad-ID was created jointly by the ANA and the 4A’s during the early “Wild West” days of digital media. Ad-ID offered a standard ad identifier and associated metadata, laying the “tracks” for more streamlined advertising across the ecosystem.

More than 3,000 advertisers and 700 agencies in the US have been using Ad-ID primarily for linear TV. However, with digital and streaming, the protocols that have worked for so long in linear are nonexistent – it’s common for the same ad to have a different identifier and tag for every ad server.

The result is that the system cannot discern when an ad has been previously served to a device or viewer, resulting in repetition that plagues both viewers and advertisers.

If advertisers simply registered an Ad-ID code for every creative – including digital and even audio – and required their ad tech partners to insert the Ad-ID code properly into the VAST tag, the promise of data-driven ad transactions, placement and optimization for better cross-platform measurement and outcomes could finally be achieved.

A recent CIMM research study of nine leading TV attribution providers found nearly 25% of any given campaign’s spots are mislabeled and misrepresented. This gap produces a staggering 2-3x impact on the return on ad spend for a marketer. The study concluded the gap could be eliminated by using a simple, universal Ad-ID for every ad.

Why isn’t this happening? Put simply, most industry leaders aren’t aware of Ad-ID and its critical value to them. But when I speak with advertising leaders, it takes about three seconds for the concept to register. Frequency management is advertising’s most pressing – and solvable – issue. It’s not hyperbole to say the future of ad-supported video and audio relies on getting the consumer experience right.

Most recently, NBCUniversal proved to be the first industry player to recognize the potential of Ad-ID, applying the standard to its Peacock streaming service and extending it to its business partners. The network already put Ad-ID to the test in one of the world’s most famous televised events: the Tokyo 2020 Olympics.

With billions of dollars now committed to connected TV advertising, there is an urgency to fix the current system, which is ill-equipped to deliver the quality consumer experience that viewers, publishers and marketers expect. Publishers, advertisers, agencies and ad tech companies alike should insist on using Ad-ID on every video creative to finally address frequency management and ensure that ad investments deliver as all parties hope and expect they will.