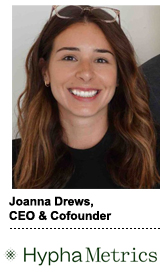 “We’re getting a lot of inbounds,” said Joanna Drews, CEO and co-founder of HyphaMetrics, a measurement startup that launched last year and now has a panel that’s working to scale to 5,000 homes and roughly 15,000 devices.

But the recent wave of interest in new cross-media measurement approaches is about more than Nielsen undercounting audiences during the pandemic or the fact it lost its Media Rating Council accreditation for local and national TV measurement in late August as a result.

“The buy side and the sell side have both been investing to better understand consumer behavior, because the options they have aren’t providing the information necessary to make the right business decisions,” Drews said. “The pandemic added fuel to the fire – but the frustration was brewing for many years.”

HyphaMetrics tracks person-level media usage across devices through a piece of hardware it calls the coreMeter, which is a box that serves as a hub for HDMI feeds emanating from TV sets, set-top boxes and gaming consoles. The coreMeter uses a proprietary measurement approach to analyze each feed, including IP traffic on the router, which HyphaMetrics in turn uses to generate metrics, such as who’s watching what content in real time and a deduplicated view of consumption for individuals in a household across devices.

In mid-October, HyphaMetrics struck a partnership to integrate its panel data into VideoAmp’s measurement solution.

AdExchanger: What’s unique about your approach?

JOANNA DREWS: One of the main things that makes us different from Comscore or Nielsen or any walled garden or data platform out there is that, unlike them, we put our data into a marketplace so that everyone can access it.

It’s our belief that the data wars will continue and it will only get harder to understand how people consume media. Everyone should be able to speak the same language when it comes to data.

What are the battle lines in the data wars?

It’s TV versus digital and understanding the convergence between the data sets. What do behaviors look like from a cross-platform standpoint?

But it’s also about understanding the entire omnichannel experience, from TV and linear to streaming and video gaming, regardless of whether someone is using a set-top box or an antenna.

How do you avoid being a black box?

Our technology is a non-intrusive media player that serves as an intermediary between the TV and all the secondary devices in a home, and we get permission from the household.

The result is what we call zero-party data. It’s a layer deeper than first-party data and measures the moment of exposure to media, ads, product placements or content. This allows us to be a source of truth for the industry, like a common language.

How do you ensure data quality and accuracy?

In two ways. First, the people in our panel go through a rigorous recruitment process. We use sample surveys, but we also validate everything, including demographic and ethnographic information.

Then we use computer vision and optical character recognition so we can understand what’s happening on the glass. It’s fed through a machine learning algorithm and parsed by source. If you’re watching TV on your Apple TV versus a set-top box versus playing a video game, we apply a different set of rules to address different viewing environments.

We don’t listen to audio snippets or make inferences, like, “Oh, this is Seinfeld, season three, episode six, so it could have been playing on any one of these three apps.”

Does the definition of a panel need to change as new data sets come in?

Panels are changing because of the rise in consumer-facing products. It’s great for scale – a panel can never provide that [scale]. But our devices are in the household, so we know who is sitting on the couch.

We take an old-school approach to panels. They need to be representative of the US population, appropriately distributed across the nation and match back to US census data – there are no shortcuts.

Old school … but what about the blockchain connection? You’re also the measurement chair of AdLedger.

We already use CryptoRTB [an open-source protocol that relies on the blockchain to validate media transactions and identity in the supply chain] to power our permissions and give access to our panel data. Using cryptography, I think we can get to a world where anyone can be a ratings provider.

Speaking of the still-dominant ratings provider, though, what do you think of Nielsen’s recent struggles?

There are a lot of reasons this happened: fragmentation, changes in buying behavior and media consumption and, of course, growing frustration on both the buy and the sell side for many years. We’re at a point of inflection, and the market is responding. That’s why ViacomCBS is using VideoAmp and NBCU put out its RFP.

Currency providers of the future will not be the most powerful black box in town. We’ll see a more democratized situation with multiple data players and providers to help brands meet specific objectives. We’re already seeing buyers and sellers moving in that direction.

One year from now, is Nielsen still the primary currency for TV and video?

A year from now, we’ll see more of the same. Nielsen isn’t going anywhere, and companies like VideoAmp will make more announcements.

What I’m curious about is three to five years from now – by then we could see a drastic change. I’m not sure who will lead it or if we’ll have multiple currencies, but I do know that change is coming. Things are going to get very interesting.