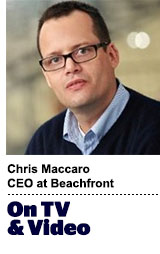 “On TV and Video” is a column exploring opportunities and challenges in advanced TV and video.

Today’s column is written by Chris Maccaro, CEO at Beachfront.

The market for addressable TV advertising is projected to almost double in the next two years.

Over the last several months, the rapid rise in addressable has been driven by increases in the number of connected TV devices as consumers shift toward streaming. The next step for addressable, however, won’t be fueled by connected TV, but instead by bringing addressability to traditional linear TV. EMarketer estimates that addressability could contribute more than $3.6 billion in TV advertising by 2022.

There are three reasons why legacy TV is the key to addressability:

Pay TV’s scale: Even when considering the enormous shifts of 2020, traditional TV as we know it is not going away anytime soon, and as the eMarketer chart below shows, it’s still where audiences are spending the most time. Both pay TV and non-pay-TV households are predicted to sit at 60+ million through 2024.

Also, consider the financial impact of pay TV’s resilient scale: advertisers will spend the most money on cable and broadcast television. By investing in these environments, and how and when they decide to serve addressable ads, it meets TV advertisers where they are already, versus trying to convince them there’s a better opportunity elsewhere.

Media buyers’ diversified TV investments: Here’s where things get interesting as increasingly savvy, modern media buyers push the industry further into transformation. Connected TV has democratized access to TV inventory for more digitally inclined ad buyers, who are jumping on the opportunity to invest in impressions and spots on the biggest screen in the home. Programmers benefit tremendously from bringing linear into the fold, commingling traditional TV inventory with this CTV inventory and unlocking pent up addressable dollars from a wider set of advertisers.

Infrastructure retrofitting opportunities: Today, the physical infrastructure of pay TV is embedded in more than 70 million homes in the United States. Even with small declines moving forward, pay TV’s unquestionable scale requires comparable technological advancement to what’s transformed connected TV the past several years. There are ways to retrofit traditional TV’s infrastructure. It takes time, but the business opportunity is just too big to ignore, and shouldn’t be discarded simply because of the growing prowess of streaming TV.

Let’s recap and discuss the best path forward for making addressability a reality in legacy TV.

For starters, programmers need decisioning systems that connect disparate viewing points. Pay TV — across local and national, broadcast and cable — is capable of providing lucrative addressable opportunities, yet it lacks the advertising infrastructure needed to fully capitalize on those opportunities.

Further, industry-accepted measurement standards and use of more first-party data are critical. Legacy TV infrastructure changes may even help on the measurement side; with uniform buying comes uniform measurement.

Most importantly, advertisers hold the purse strings. It’s tough to deny the trend of brands seeking a shift to more efficient, uniform ad buying practices across all forms of media.

Establishing these systems takes collaboration and resources from networks, MVPDs and advertisers — even as ad tech providers and TV manufacturers (themselves, providers of ad tech infrastructure at this point) have already done a good bit of legwork there.

By doing the necessary infrastructure work to commingle legacy TV and connected TV inventory, we can accelerate our collective path toward a more addressable future.